Going with Your Gut Feeling: The Link Between Your Brain and Your Digestive System

Going with Your Gut Feeling: The Link Between Your Brain and Your Digestive System 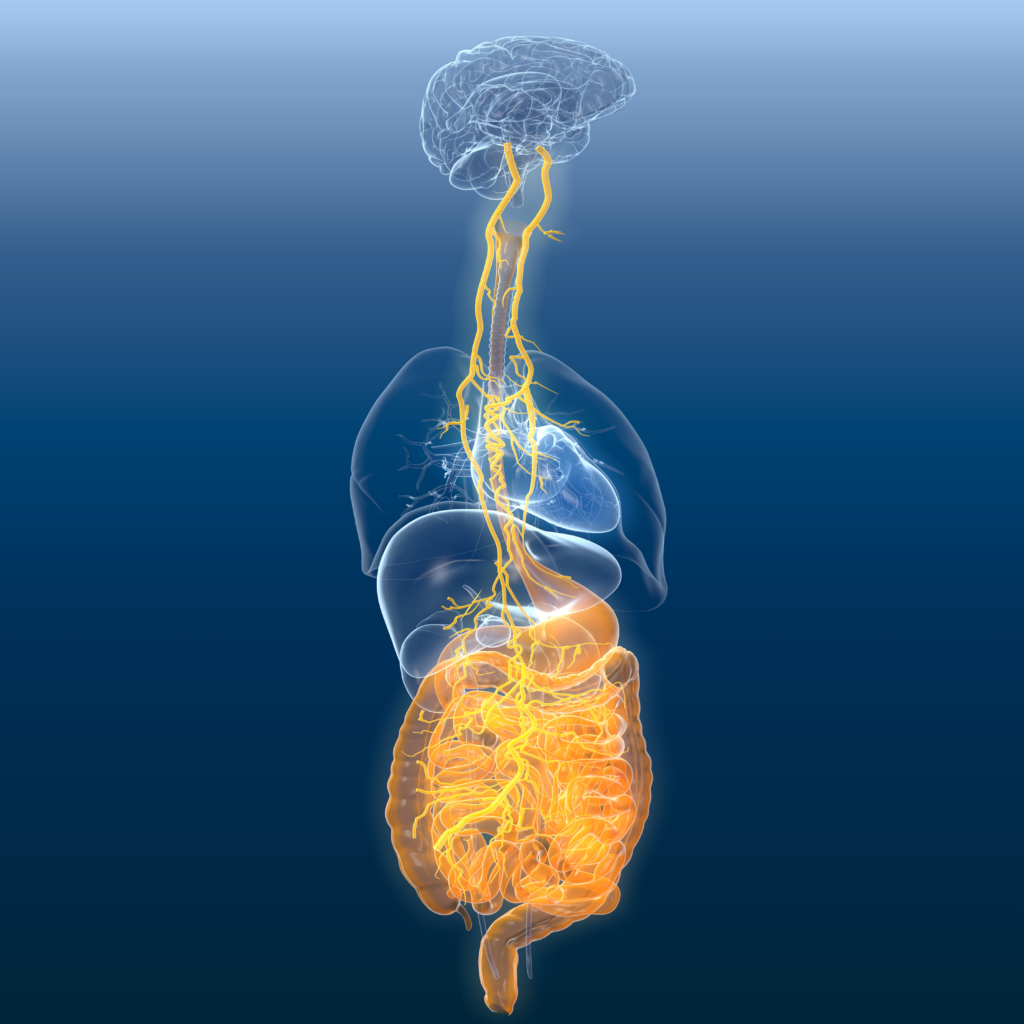 When you are in a tricky situation, a famous piece of advice received is to ‘go with your gut’; a phrase coined to describe acting on the feelings and emotions associated with your problem rather than thinking through the issue logically. But did you know your gut could potentially be impacting these feelings and emotions in the first place? Our brains are known regulators of the movement of our digestive tract, which is particular noticeable when we are nervous or anxious. Although the brain-to-gut communication was thought of as a call and response on motility and digestion, new research suggests the gut can initiate new chat to the brain via the millions of tiny organisms which inhabit our digestive system. This gut signalling could be having a huge impact on our mental health and has also been implicated in the development of some brain disorders. So let’s learn just how important those gut feelings are!

My Stomach is in Knots: Brain-to-gut signalling

There is nothing worse than feeling your stomach drop after realising you have made a mistake; leaving your phone on the seat of the bus, clicking ‘reply all’ to a work email intended for your favourite colleague or double-tapping that Instagram picture from 2014 while mindlessly scrolling. The biology behind this sinking-sensation comes from your brain signalling to your gastrointestinal (GI) tract which consists of your stomach & intestines (gut). Your GI tract is a pretty independent organ system for the majority of the time; having it’s own nervous system (called the enteric nervous system) to let it process and digest your snacking throughout the day. The brain does not have to think about absorbing nutrients from food or processing waste as the enteric nervous system is there to take care of the smooth running of digestive machinery.

However, the brain is directly connected to the gut via different pathways which start in specific brain regions. One of the ways the brain can interfere with gut movement is via neurons in the hormone centre (the hypothalamus) which control the autonomic nervous system (ANS). One part of the ANS called the parasympathetic branch is termed ‘rest and digest’ as it is in charge of ‘automatic’ processes, such as breathing in and out all day, keeping your heart beating and, you guessed it, digestion. The enteric nervous system is a branch of the ANS so although the gut can move readily without brain signalling, the head can interfere with this motion if needs be.

Another pathway which connects the brain to the gut is the stress pathway. Stress hormones are also released by the hypothalamus but the trigger comes from higher emotional brain centres in the pre-frontal cortex. Stress hormones impact the sympathetic branch of the ANS which is vital in directing energy from normal processes to prime you to fight or flee. When this pathway is activated, your stomach to stops its normal movements as the energy is required to deal with the stress at hand. This disruption to digestion is what we associate with a ‘nervous tummy’, making is tough to eat when we are stressing out. 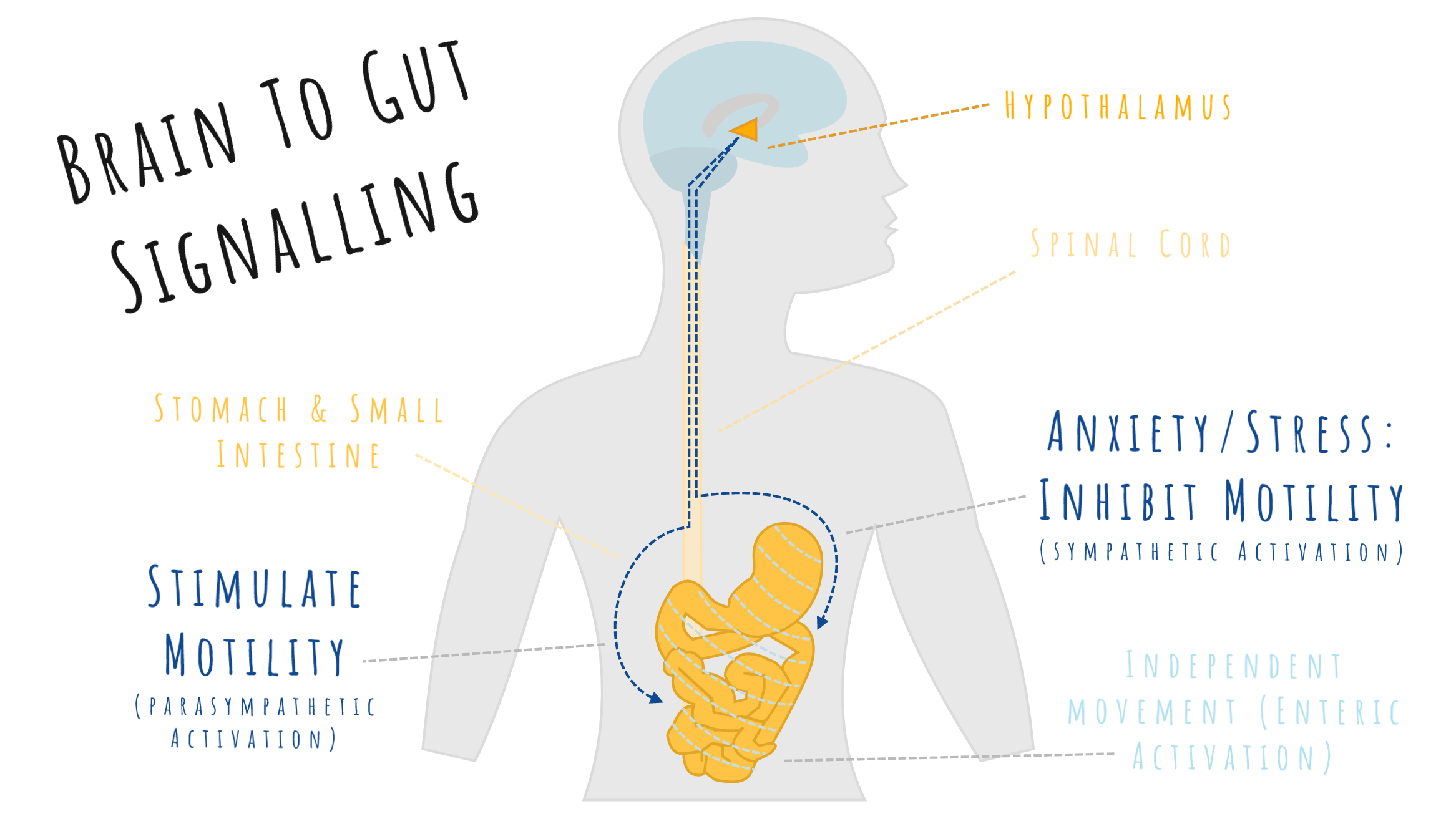 My Tummy is Talking to Me: Microbiome Signalling

So your brain has some control over your gut, but what about your gut talking back? Your GI tract has a known signalling system to inform the brain of gut movements. These wires are called ‘sensory neuron afferents’ which can signal up to the brain stem when stimulated by movement (mechanical stimulation), the immune system and chemical alterations within the digestive system. The brain stem then relays this information to brain regions like the hypothalamus to alter digestion via the ANS and also behavioural & emotional regions. The ‘higher’ regions which receive gut-mediated signals included the fear region (the amygdala), an area involved in empathy and impulse control (the anterior cingulate cortex) and also a region vital in decision making (orbitofrontal cortex). The gut signals are also involved in the positive-reinforcement of eating as they interact with dopamine-producing brain regions, leading to a ‘rewarding’ stimulation. This means that the signalling from your gut can impact not only your digestion, but your behaviour and mental state too.

Aside from communicating the most up-to-date digestion signals, new research suggests gut signals can send novel info to your brain and this signalling is mediated by microbes. Your gut is filled with millions of tiny organisms called microbes which are vital for training up your immune system, protecting you from disease and aiding your digestion. Microbes are living, single-cells organisms, like bacteria, and every person has a unique composition of microbes depending on your environment and the microbes in your family. This microbial population can be affected by diet, stress and disease. Microbes in the gut can trigger signalling to the brain as they release chemicals which activate neurons (neurotransmitters), and it is thought that the presence of specific bacterial species could impact different brain functions. If you take mice and remove all their gut microbes, they displayed problems with learning and have reduced anxiety, highlighting in the simplest way that microbes in the gut can impact cognition. Research now is looking at exactly how these microbes could alter your brain activity and which ones are beneficial to our health. 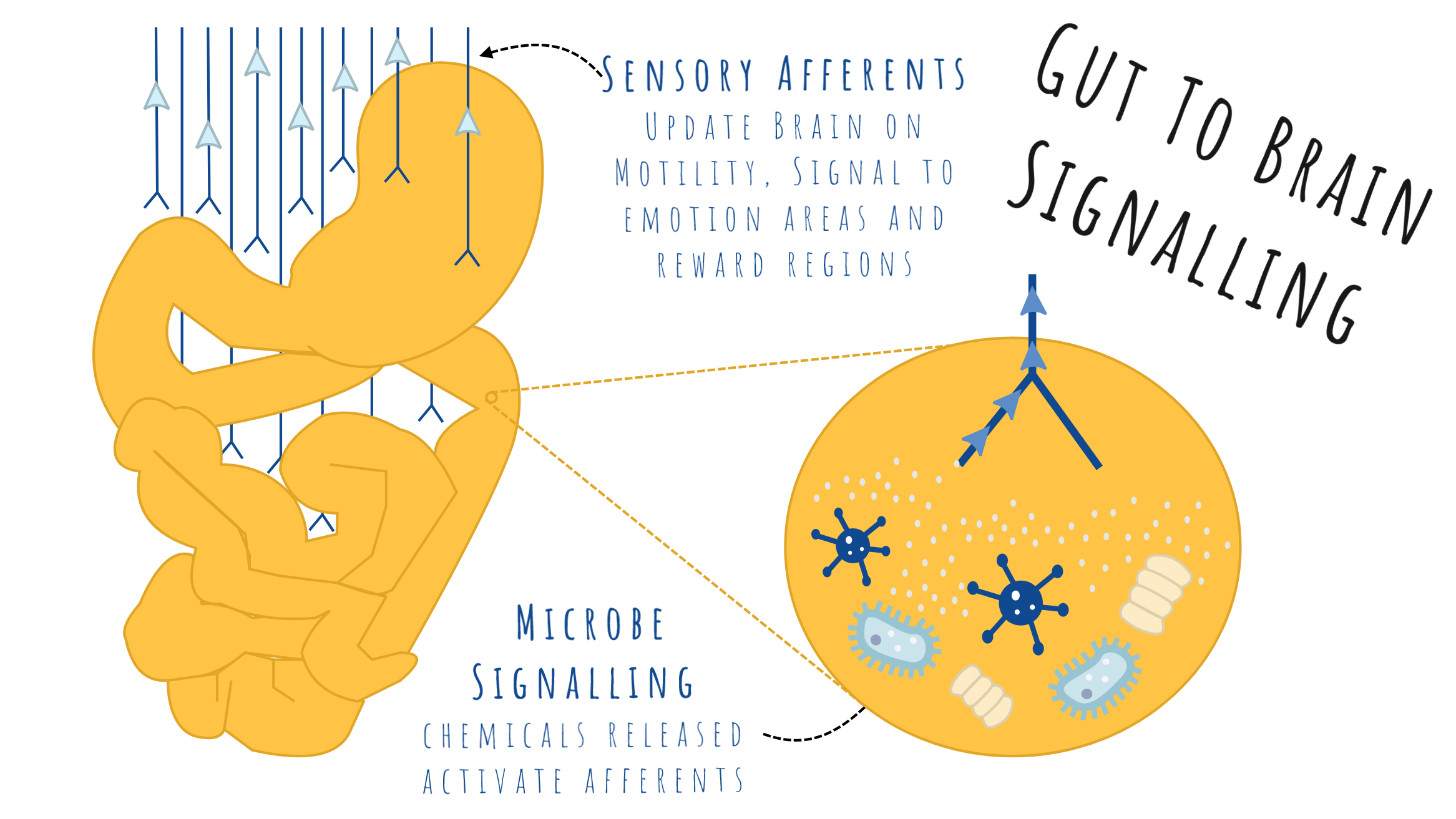 While the relationship between our brains and digestive systems have been described for many years, information about the new signalling from your gut to your brain is only just beginning to surface. Studies in both mice and humans have revealed potential links between the microbes in your gut and having cognitive disorders like depression, anxiety and even late-life diseases like Parkinson’s. If this is the case, maybe some of these brain conditions could be treated by altering the microbes in your stomach. I will be exploring some of this incredible new research over future posts and address questions on if we can ‘improve’ our individual microbiomes. This new research is bringing a whole new meaning to what we understand about our ‘gut feelings’!

For more brain-based info, check out my website. And for more on microbes, try some of these links!