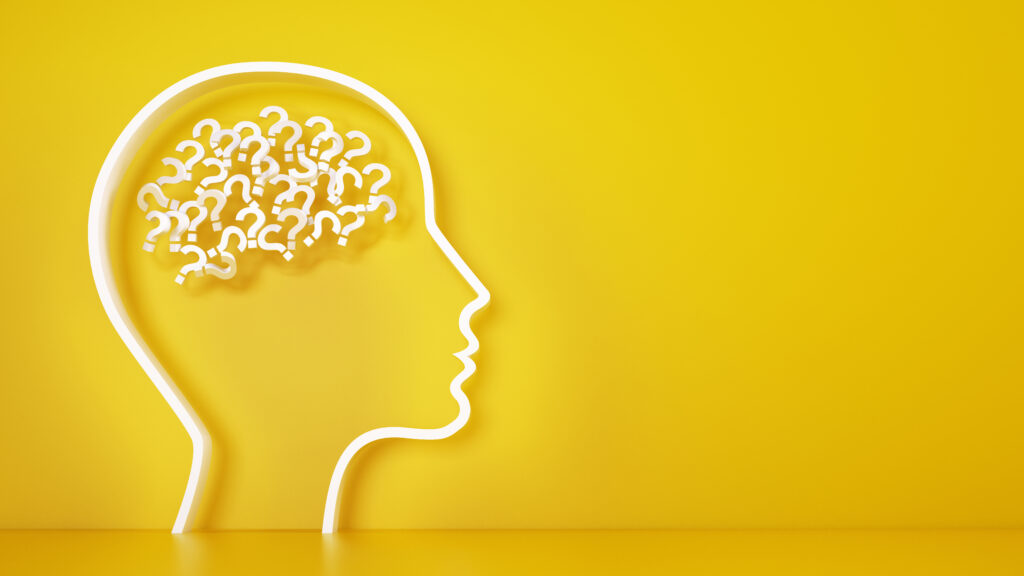 Life’s journey is based on a series of decisions. Some decisions have little consequences (Should I wear a red or blue shirt today?) whereas as others can completely alter your path (Should I completely uproot and move cities to take that new job?). But how do our heads come to a conclusion when a proposition is laid on the table? Your brain has specific regions which are dedicated to decision-making, allowing you to make a choice based on weighing up the cost-benefit outcome of a situation, the socio-emotional impact of the outcomes and how you’ve dealt with similar experiences in the past. Although being indecisive is a trait harboured by many, damage to decision-making regions can lead to extreme risk-taking and result in self-destructive behaviour. Now you have a choice – will you decide to read about how you decide or decide to not read about how you decide? That somewhat confusingly-worded decision is yours to make… 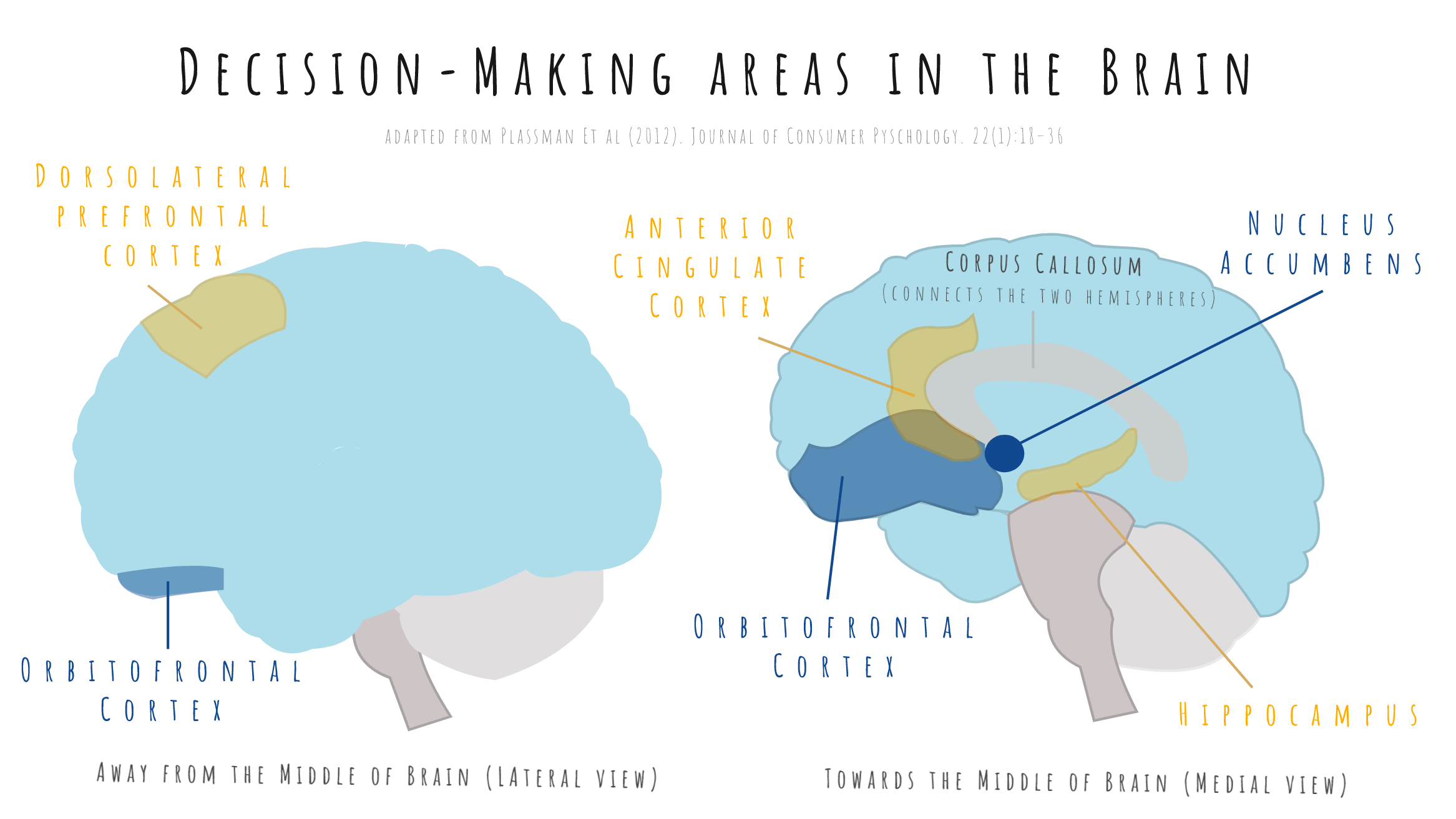 Decision making has many layers of complexity. Some decisions require little thought at all whereas others involve assessing outcomes of the many situations this one choice could impact. A region of the brain vital in decision-making is the prefrontal cortex of the frontal lobe, as when this lobe is damaged, individuals become a lot more keen to take risks. Specific areas in the frontal lobe can be pinpointed in the decision making process:

The dorsolateral (aka towards the back and away from the middle) region of the prefrontal cortex has been deemed crucial in decision making due to its role in integrating several lines of information. This is because one part of the DL-PFC is focused on surveying incoming information in your short-term ‘working’ memory and the other part deals with incoming information from other brain regions, such as long-term memory and emotion centres. These two tasks mean the DL-PFC can judge your current situation whilst assessing important information from past events to come to a fully-informed conclusion on the decision being made. Studies of the DL-PFC on the left side of the brain also indicate in may be important for ‘self-control’ in decision making. This region was activated in individuals who chose healthy food over ‘unhealthy’, tasty food; arguing its activation could play a part in thwarting temptation. In addition, when this brain region is inhibited, individuals in an experimental set-up were much more likely to chose the option of a short-term reward over a long-term gain, hinting a role of the left DL-PFC is to prevent temptation blinding our choices. 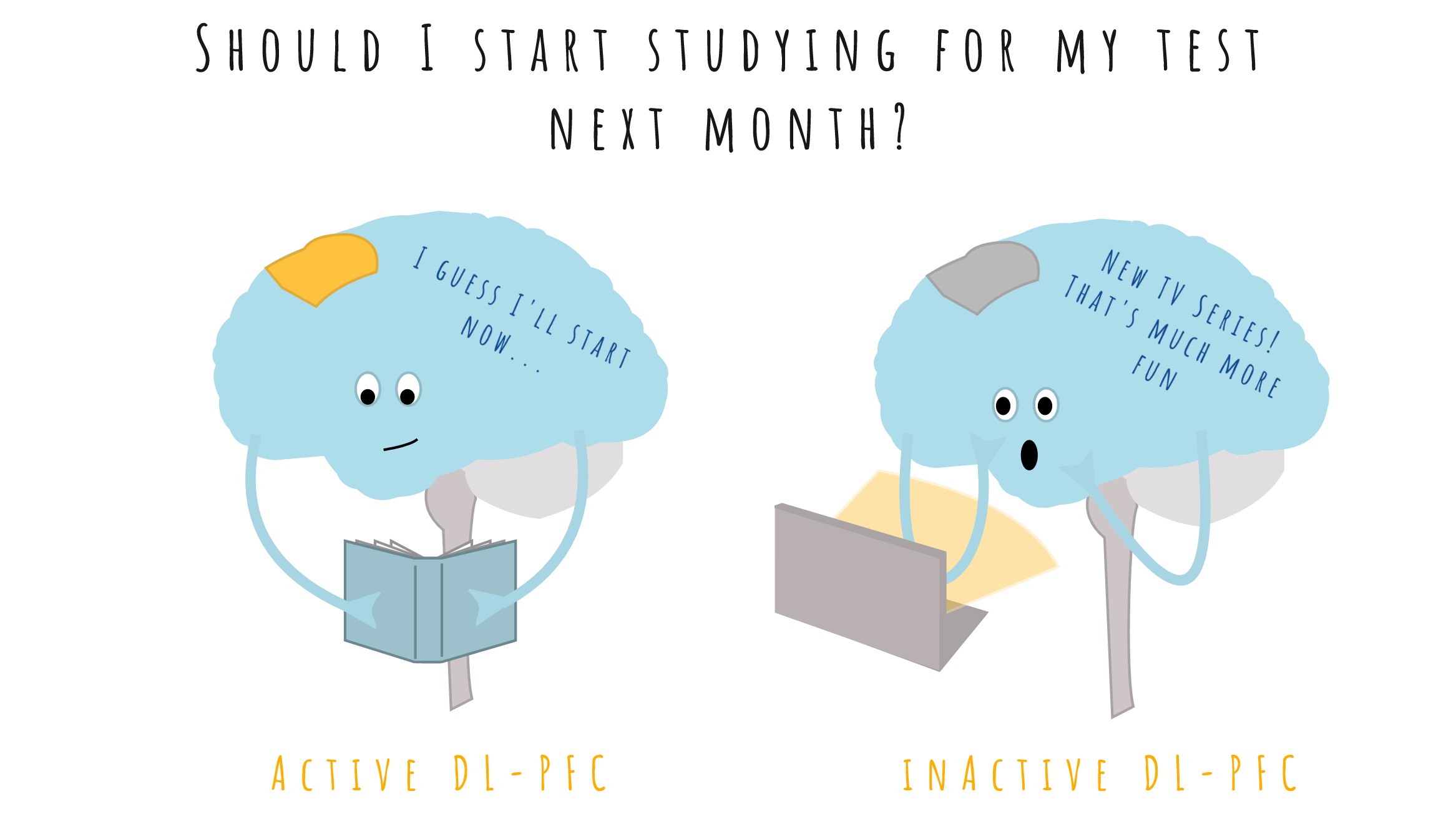 The ACC is a brain region with strong connections between the DL-PFC and the orbitofrontal cortex (OFC) as well as connections to the nucleus accumbens. The nucleus accumbens is involved in reward pathways and also regulation of emotion, so the ACC brings in an emotional element to decision-making process. The ACC is really important in modulating the response of the DL-PFC and the OFC when they are conflicting in their direction over a choice. Also, the ACC is activated when a negative outcome or no reward comes from a decision, storing the ‘bad’ option to inform future decisions. Individuals who have damaged their ACC can have trouble detecting errors made following an event, shown by a reduction or loss of brain activity called ‘error-related potential’. Such people, although low in their numbers, have found to be more susceptible to not recognising previous errors made in tasks like sorting playing cards according to an unknown rule eg. If cards must be placed spade, heart, club, diamond and if you make a mistake, this is not rectified on your next attempt. In primates, activation of different parts of the ACC is witnessed by fMRI when remembering past rewards vs when thinking of current rewards for the self or others. The ACC is also thought to be linked to the insula; a brain region responsible for internal negative emotions. Together, the ACC helps you decide what to do by recording errors and the negative consequence of a choice so they don’t happen again. 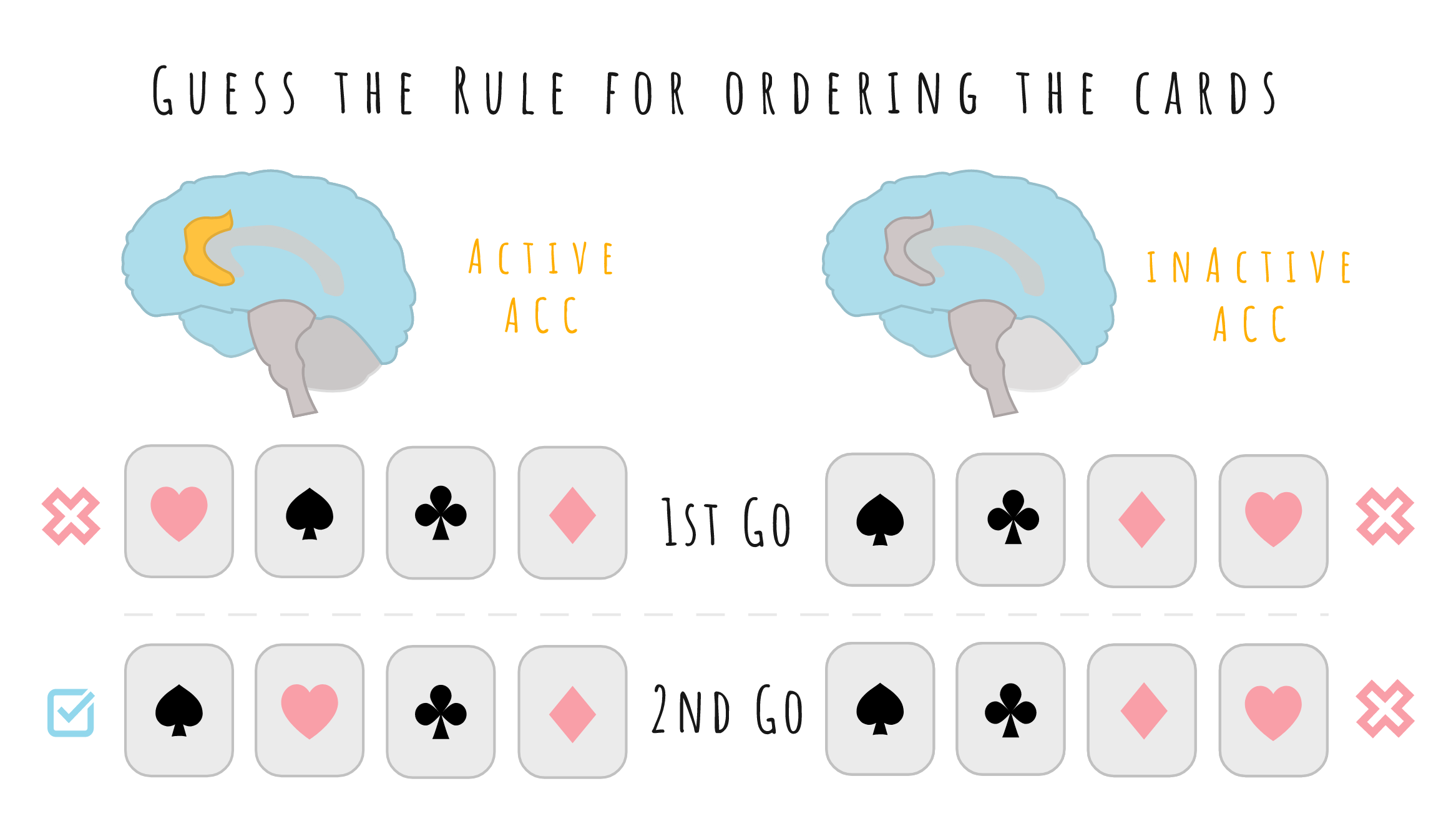 The OFC is the rationaliser in the decision making process. This brain region weighs up the ‘gain’ you will get from either side of a decision plus, due to its connections to emotional brain circuit (the limbic system – see future post!), the OFC can further judge the emotional consequences of a choice. The OFC can be physically split into sections based on it’s activity. The part of the OFC closest to the middle of the brain is responsible for coding rewards whereas the part further from the middle evaluates the punishment you could get based on your decision. If you then look at the region of the OFC closest to the front of the brain, this region processes ‘good’ sensations, like the taste of chocolate, whereas the back of the OFC deals with more complicated ‘good’ rewards, like money. OFC neurons are highly active when in anticipation of getting a reward and fall quiet when punishment is associated with an action – making it look like a region which signals ‘go’ or ‘no-go’ based on the expected outcome of a situation. In terms of making a decision, this signal aids you making your choice by predicting the value of the options you have to choose from. Individuals with OFC damage are described as being impulsive, and OFC dysfunction is reported in people with seriously debilitating mental health conditions like addiction and schizophrenia. Interestingly, when rats with experimentally lesioned OFCs are offered a reward following a long delay, the animals will continue to wait for this reward, even if rewards of a similar value are offered in the waiting period. This result suggests than the OFC is not necessarily the seat of impulse control but the region were reward values are constantly updated to reflect a situation. Therefore, your OFC is vital in informing you of the cost (physically or metaphorically) of your choice. 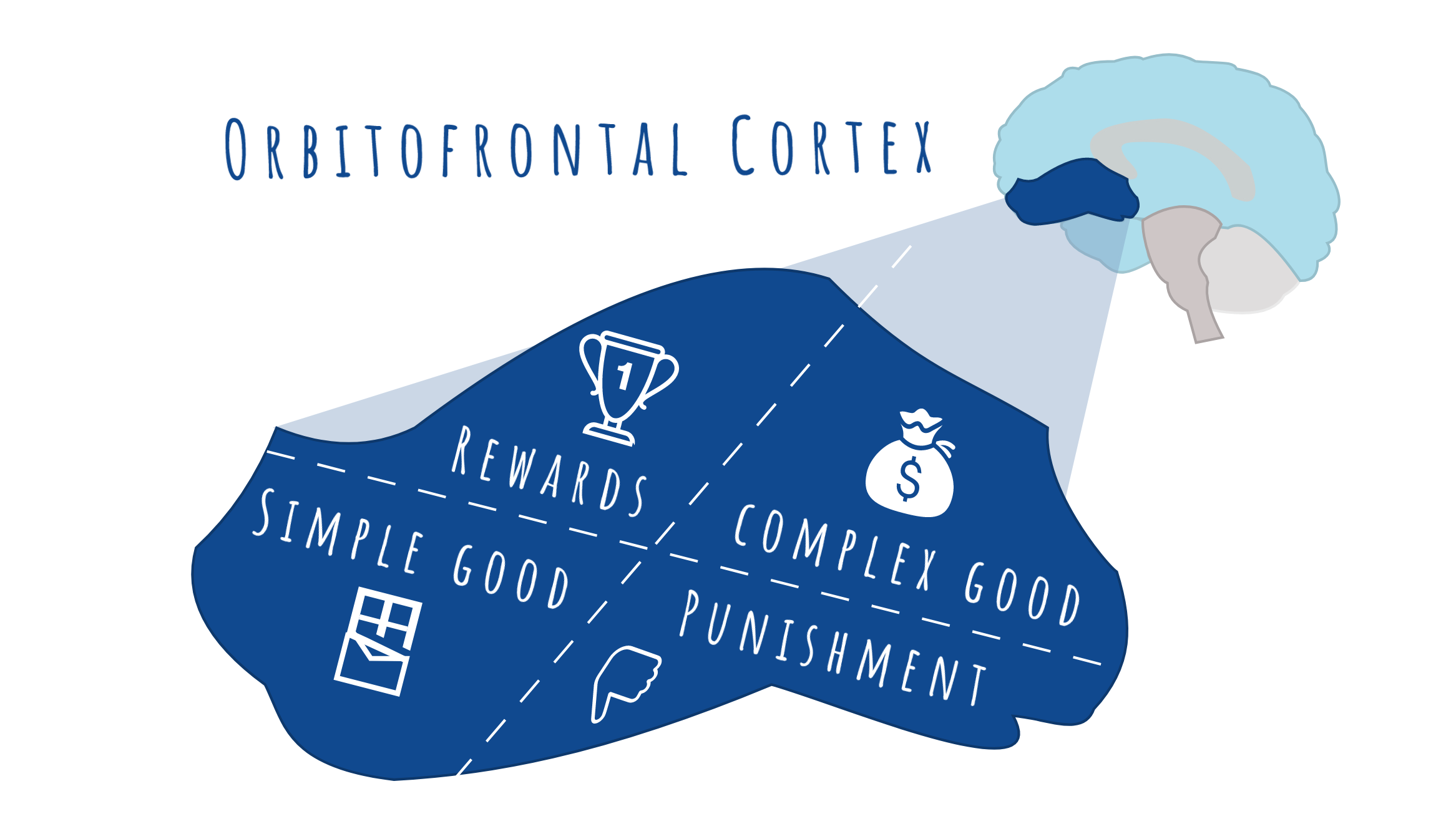 Decisions are a delicate balance of reward, risk and real-life consequences, with many of our new challenges relying heavily on the choices we made in past situations. The prefrontal cortex regions carefully input and process a novel situation in order to compute the ‘best’ decision for us as individuals and within our society. Now we understand the biology of decision basics, I will be talking in the future about how these pathways can be altered following specific experiences and disrupted in devastating conditions such as addiction and gambling. I will also explore if it is possible to change how we make decisions based on our brain activity. Thank you for deciding to read this decision-making post – I hope your OFC is happy with the cost of your time over the benefit of what you learnt and your ACC is not registering a decision-making error!

Feel free to check out my website for all things brain-related and if you decide to delve further into decision making in the brain, follow some of the links below!

Thanks for this post. I have been looking for something like this for year’s thank you!
https://blog.mindvalley.com/brain-regions/

Going with Your Gut Feeling: The Link Between Your Brain and Your Digestive System – Kwik Learning

[…] which receive gut-mediated signals included the fear region (the amygdala), an area involved in empathy and impulse control (the anterior cingulate cortex) and also a region vital in decision making (orbitofrontal cortex). The gut signals are also […]