New Year, New Me: The Neuroscience of Turning Goals into Habits

New Year, New Me: The Neuroscience of Turning Goals into Habits 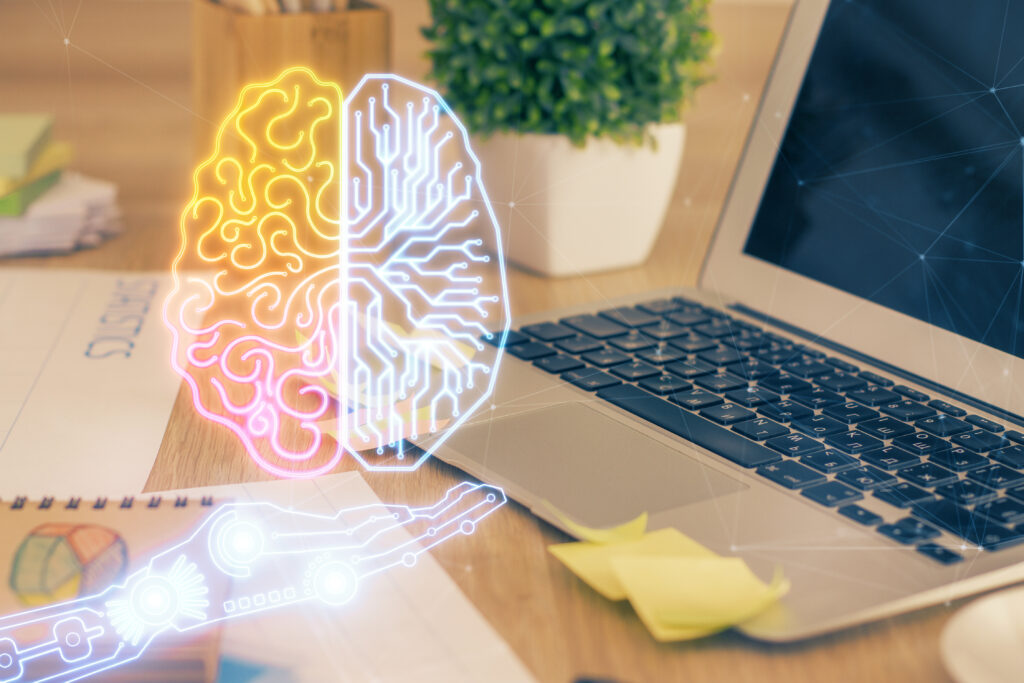 As the next decade creeps ever closer, the ‘Whats your New Year’s resolution?’ conversations start. The turning of the clock on the 31st December represents a time for change, with January bringing a wave of motivation to instil some new habits into your life. Whether your goal is to spend less time on your phone, more time at the gym or taking time for yourself, how can you ensure you follow through with your new practices once your post-holiday energy has dwindled and life becomes busy? Your brain holds the power to transform your idealistic plans into solid routine but you have to push yourself in order to lock these new activities into place. Let’s take a look at how your brain makes new skills automatic behaviours, and what you can do to help transform your New Years resolution into daily routine.

Goals: A Blend of Effort and Skill

A goal can be defined as an outcome which will only come about with intervention. In other words, effort, motivation and a change in behaviour are needed to achieve the desired result. All actions you perform require different levels of effort (motivation) and skill. Some actions, like driving to work, require lots of skill (driving a car safely) but little effort as it is part of your routine. Other tasks, such as de-icing the car on a frosty morning, require little skill (scraping ice) but lots of effort because doing this job requires exposing yourself to the bitter cold first thing in the morning. New Years goals sit in a different category to both mentioned as they usually always require high effort, and can need high skill. This category of actions is one of the most difficult to maintain initially, but after practice, these behaviours move slowly into the high skill low effort (like practicing yoga regularly) or low skill low effort (like leaving your phone in a different room of an evening) categories. 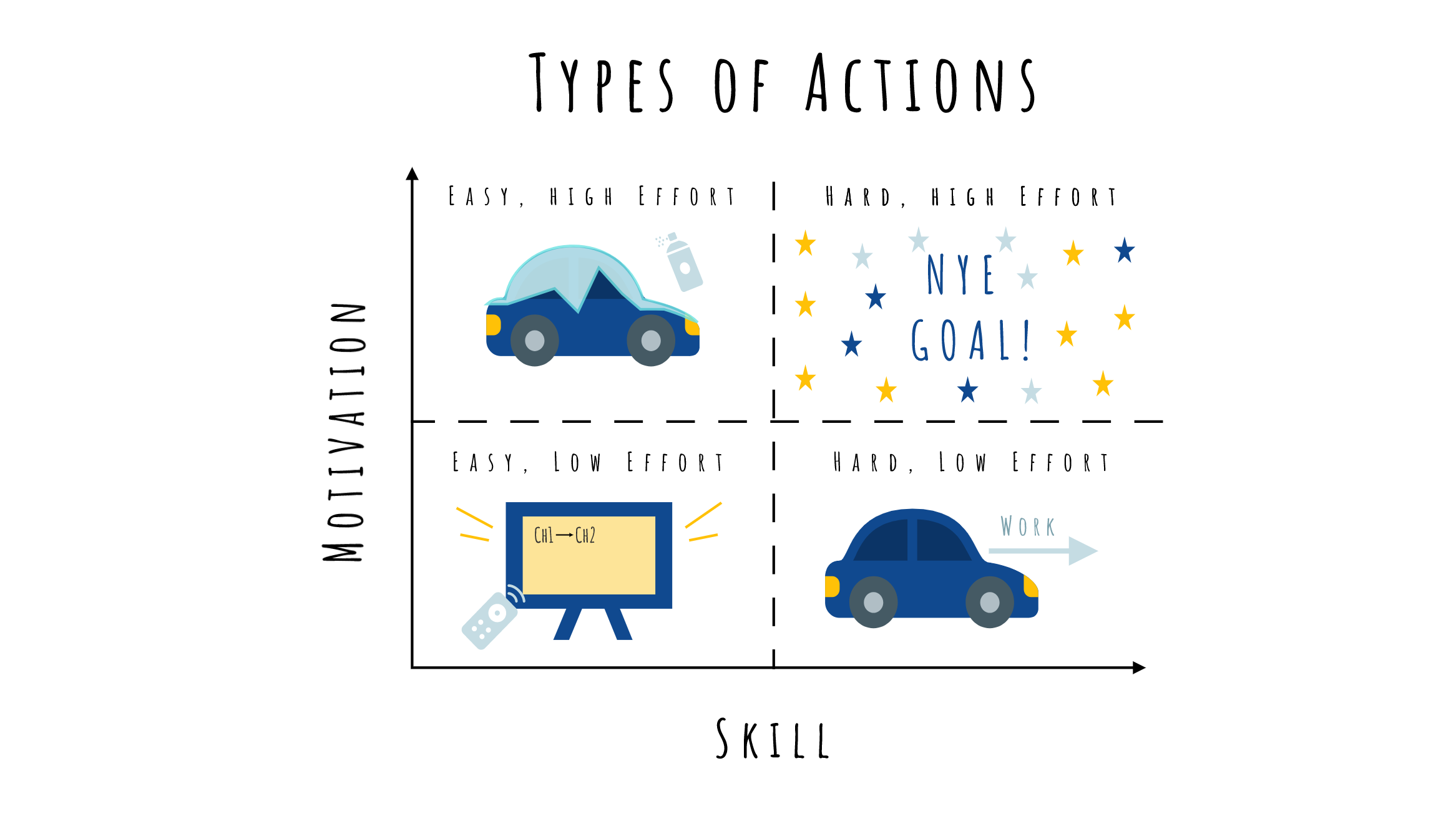 From New Behaviour to Habit in your Brain

Your brain can find it relatively easy to set a goal but to transform that goal into routine behaviour requires a shift in brain activity. Goal-related activities require execution of executive function; a collection of behaviours including attention, planning, control of inhibitions and working memory. The seat of executive function is in the frontal lobe, specifically the prefrontal cortex, which includes areas vital for weighing up the cost of an action vs the reward received (dorsal anterior cingulate cortex), decision making (orbitofrontal cortex) and general problem solving. The activation of executive function requires effort, consciousness and new goals. Therefore, practicing new goals takes focus and attention; energetically expensive actions in the brain.

However, if your brain engages in the same activity repeatedly and is rewarded for doing so (with the prize of dopamine release), it is able to transfer this new goal into a habit. Consciousness is extremely precious, so the prefrontal cortex has the ability to automate actions deemed important in order to remove the need for consciousness in their practice. This habit formation requires a shift from prefrontal activation when performing a task to activation of sensory and motor regions of the brain, thought to be mediated by a change in activity in a brain region vital for voluntary movement and stimulated by the reward pathway; the striatum. One part of the striatum is strongly connected to the prefrontal cortex where as the other part connects to motor and sensory areas. In mice, the transition of a new skill into a habit switches striatum signalling to the latter segment, implying the attention initially needed to drag yourself to practice your desired goal is no longer a necessary requirement once a skill has been cemented. The timing of this change in mice was measured over an 8 day period of practicing a new motor skill every day. In people, a common time period mentioned to make a habit is 21 days – this has been shown to not be the case. In reality, experimental evidence in people has found forming a true habit takes months – so not giving up is crucial to getting your brain to start to automate your new behaviour!

What you can do to stick to those goals!

In order for you to transform your resolution into routine, there are a few things you can do.

2. Write down your goals where you will come across them regularly. This could mean sticking a physical list on your fridge, or writing them on a virtual sticky-note on your computer. This daily reminder will keep your goals at the forefront of your mind and drive your want to complete them. If you start ignoring the list (our brains like to do that when something becomes a regular part of an environment), switch it up and write them somewhere else! This fresh copy of your list could give you a fresh wave of motivation.

3. Once you have decided on your goals, ask yourself the following questions:

4. UPDATE THAT LIST! Although the 1st January feels like a big deal for making life changes, you really have to capacity to set goals at any point in the year. Life happens and situations change, as should your goals. Be flexible and adapt your wants as the year moves on to keep striving forwards.

You brain is capable of turning a 2020 check list into real-life behaviours but it requires effort, focus and practice to do so. Keep reminding yourself of your ‘why’ and break down your goal into small achievable tasks to make them easier to stick to. Remember trying to make these new practices habits is neurologically possible! It just takes time, so keep that in mind if you want to give up. Have a wonderful holiday and a healthy new year!

For more brain info, check out my website and for more on making habits, try this review.