The Memory Lanes in Your Brain: How We Make Memories

The Memory Lanes in Your Brain: How We Make Memories 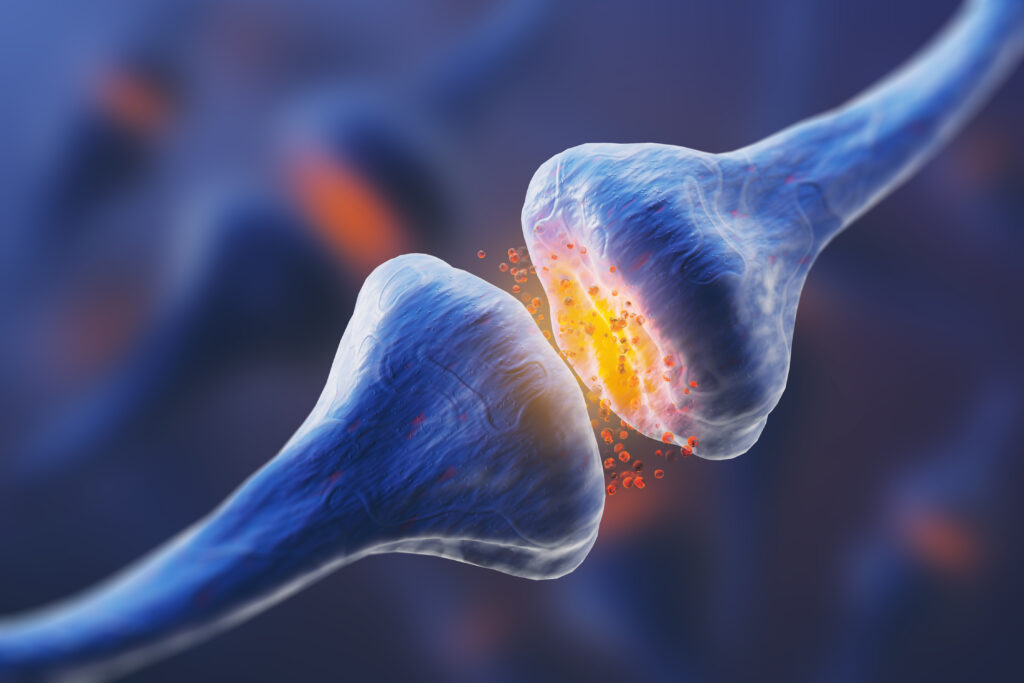 Imagine you are one of your ancestors from thousands of years ago in a completely untouched world. You are sent out to get food for the rest of your village and spot some juicy red berries on a bush. You collect a bagful to take back but are ravenous from your travels, so scoff some down quickly to power the rest of your journey. However, on your walk home, your tummy turns and you are violently ill with a bad case of food poisoning. You abandon the rest of the berries and upon your return to the village, alert your neighbours to steer clear. You describe the features of the bush, the look of the berries and their exact location. Thanks to your memory, generations of villagers can warn their offspring to stay away from the poisonous fruit.

Passing on information, stories and warnings has been a key element to human evolution, and we are able to do this because of our communication skills and our ability to form long-term memories. Memories are one of the most important tools in the human shed. They are our number one advisors for future events – playing back how similar situations panned out in the past to decide our next move – and can also be our foes moving forward (mentally stuck in the past). Our memories are used as creative stimulators, intelligence testers and evidence in the justice system. Everyone’s memories are personal, but many would leap at the chance to experience someone else’s. After all, ‘mind-reading’ is one of the most desired superpowers.

Your brain is the keeper of the memory keys and stores thousands of your precious and rather-would-forget moments, as well as tossing the unimportant info into the permanently-deleted trash can. Physically, a memory is a number of connections between neurons in different brain regions. These connections are strengthened during the formation of a memory and the more this memory is recalled or deemed ‘important’, for example experiences with an emotional attachment, the more likely it is to stick around in your head for a very long time. ‘Non-events’, like what you ate for your dinner last Monday evening, are more easily forgotten (unless your birthday was last Monday, in which case I am sure dinner was very memorable!). Memories are pretty much an alteration to your brain’s wiring – so lets grab our plyers and get to grips with what a memory actually is!

To Forget or To Form: Types of Memories

We have two main types of memory: our short- and long-term. We think of short-term memory as being recent events but actually, a short-term memory in the brain is information which is stored for less than 30 seconds – so even Dory didn’t have short-term memory loss! The difference between long and short term memory is not only time but the brain regions engaged during the processes. Short term memory is centred in the prefrontal cortex of the frontal lobe – an area known to be key in attention. Your short term memory uses your immediate attention to briefly hold on to information. Like when you are trying to remember the ridiculously long WiFi passcode from the back of the router to enter into your computer – you keep these digits in your head just long enough to type them out, but would find it difficult to recall them 30 seconds later. This is because your attention centres have disengaged and dropped the code from your brain. 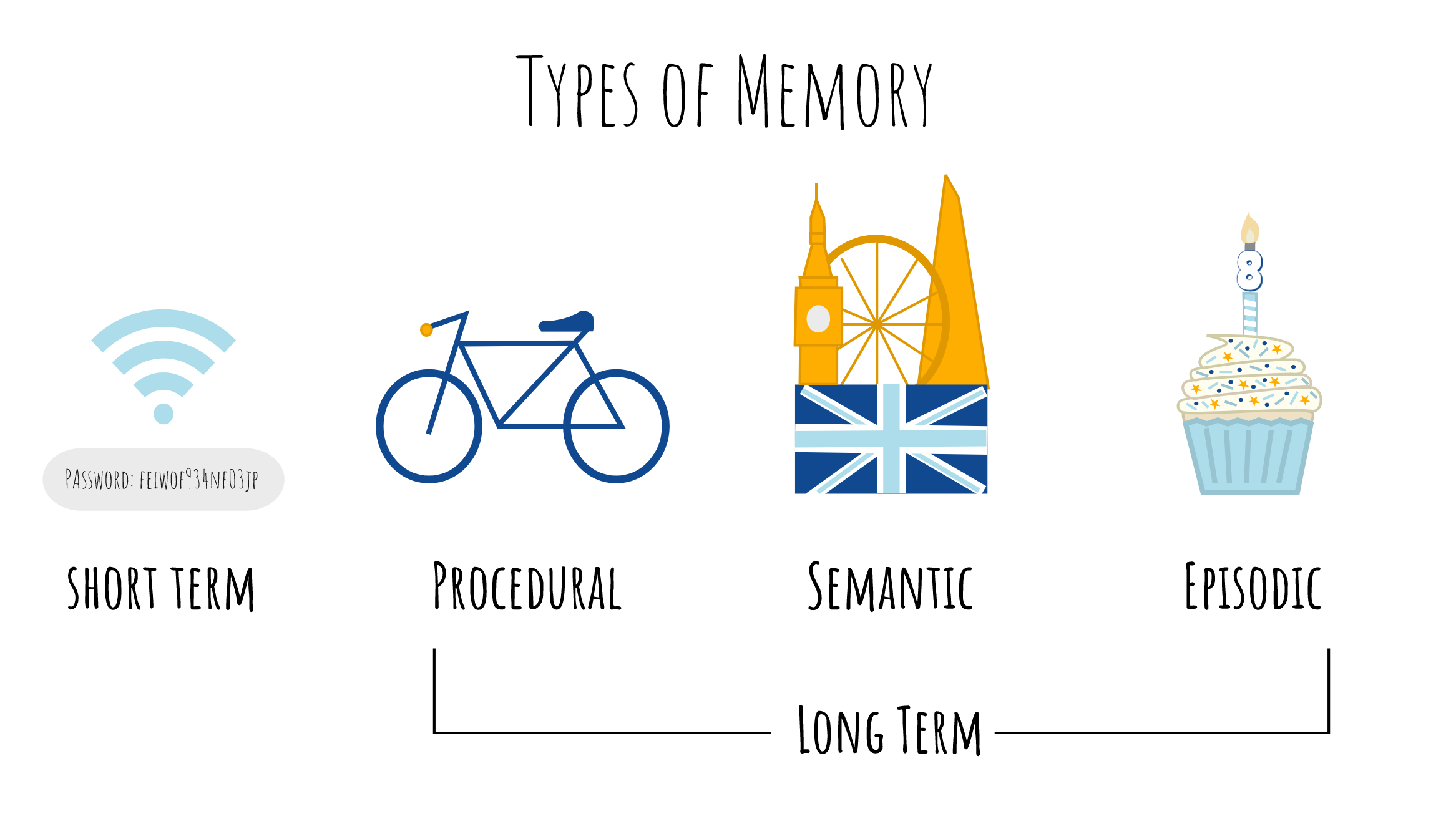 When it comes to our long-term memory, we have several different categories. We have ‘muscle memory’, or procedural memory, which stems from our cerebellum and allows us to remember skills such as riding a bike or how to hit a tennis ball. We also have declarative memory, which allows us to recall things we have learnt or experienced. This includes semantic memory, which is remembering facts such as London is the capital of England, and episodic memory, where we can describe our past events and individuals we know. Declarative memory is centred in the temporal lobe and a specific region called the hippocampus is where long-term memory formation is initiated. The hippocampus was discovered as being crucial to memory formation in a patient who had his removed. Patient HM suffered with severe epilepsy and the temporal lobe was where the root of his seizures started. Doctors removed this section, which contained the hippocampus, and HM’s seizures were cured. However, HM could no longer make new memories. He could remember events which happened a year prior to his surgery but could only hold new information for about 30 seconds. This case study shows the consequence of a non-functioning hippocampus and how crucial this region is to memory formation. 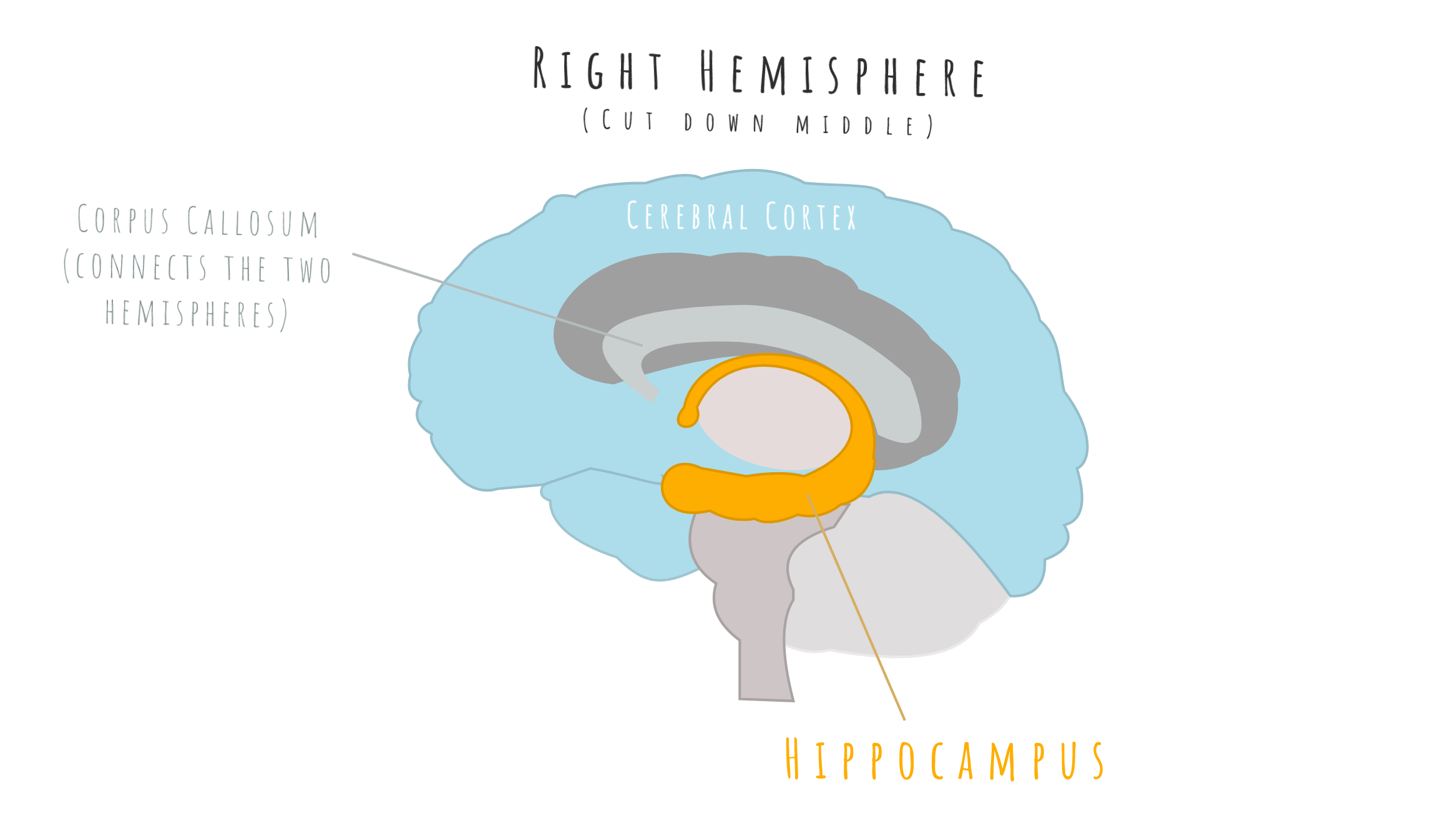 Strength Training: How we turn an experience into a long-term memory

The formation of a long-term memory requires creating or strengthening connections between neurons all involved in the experience. You can think of a memory as associations between different senses and feelings: when you smell the sea air, you are taken back to a summer years ago when you ate the most delicious ice cream and laughed so hard with your friends you almost fell off your deck chair. The neurons responsible for bringing together all of these factors come from different brain regions, like the areas which detect scent and taste as well as those associated with emotion and people recognition. The memory is therefore a trace, or an ‘engram’, which connects specific neurons in these different regions so when one association is triggered, the others are also activated and you get a wave of nostalgia. 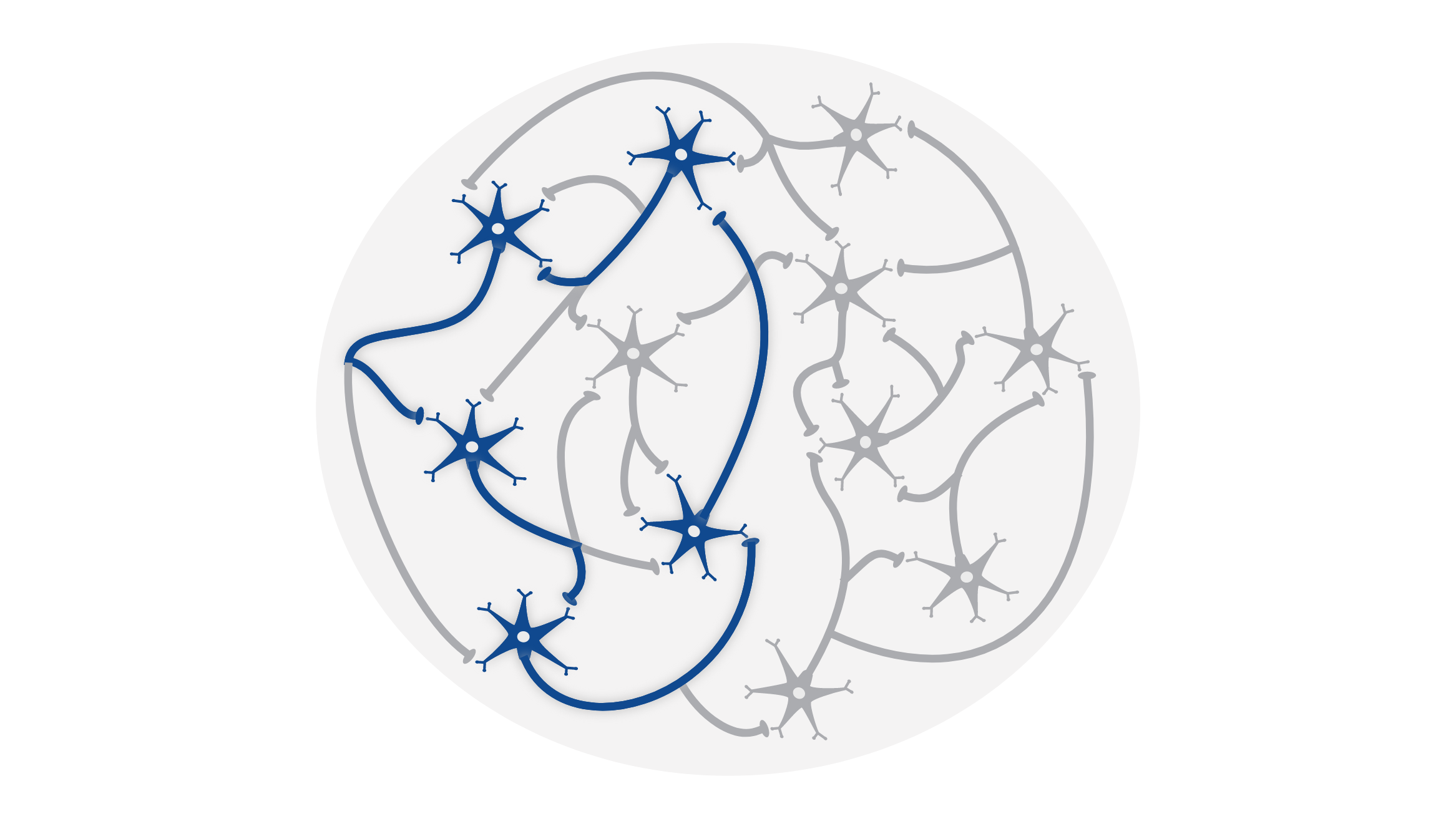 Strengthening neuron connections happens at the synapse; the junction between the axon of one neuron and the dendrite of another. These synapses can be made ‘stronger’ by making the signal propagation from the axon more likely to trigger a signal in the dendrite of the other neuron. One way this happens is through continued use of a synapse. If one synapse is constantly receiving signals, the receiving neuron recognises this connection as important and inserts more gates (receptors) into the synaptic membrane. This means that when a signal comes along, more gates can open leading to an increase in ions flowing in; triggering a large signal in the receiving neuron. This is called Long-term potentiation (LTP). If a synapse is hardly used or used less frequently over time, the receiving neuron can trigger long-term depression (LTD), removing gates from the membrane and weakening the unimportant connection. 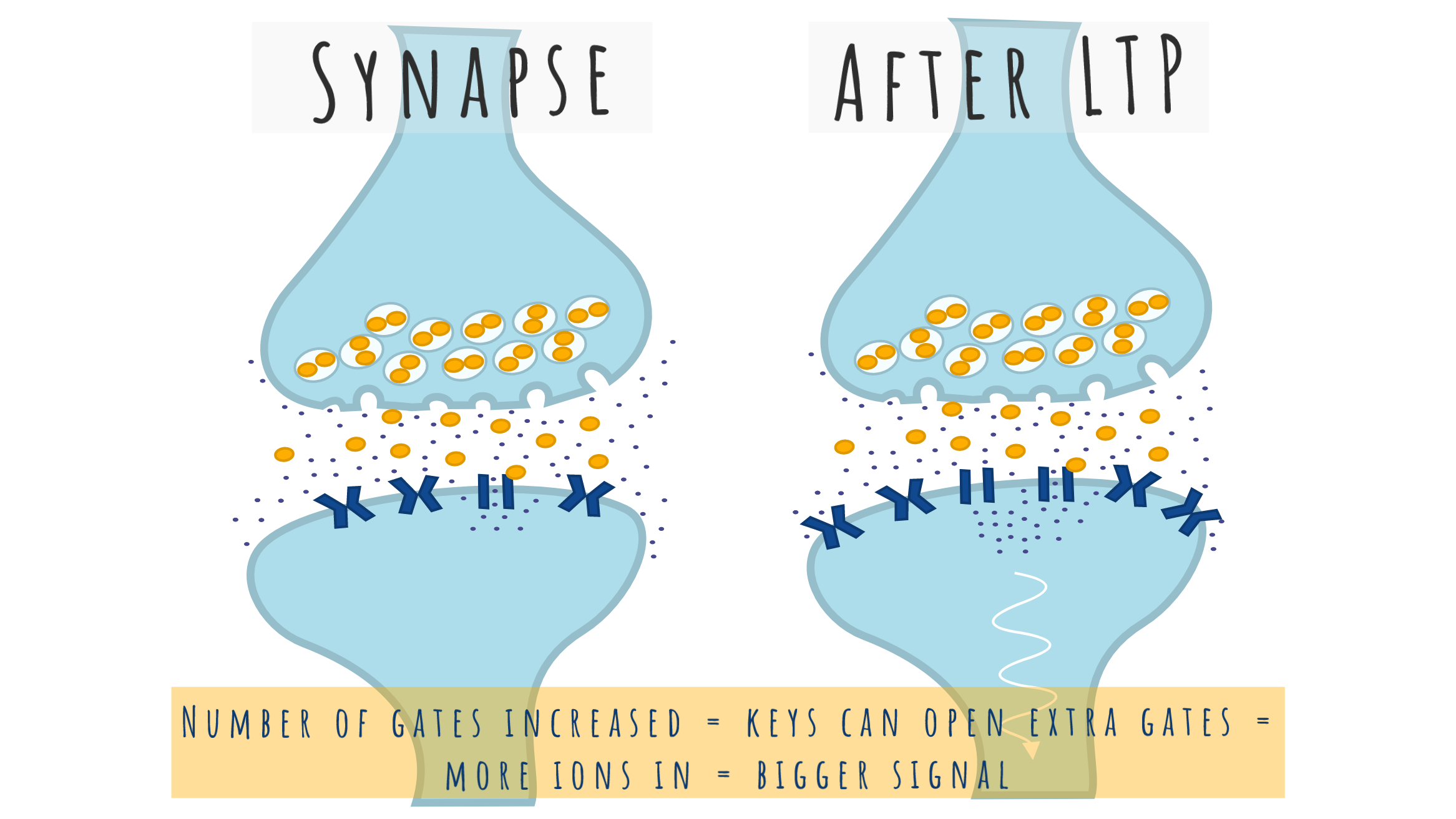 Although Patient HM could no longer make new memories, he could still remember events before his operation and this is because of where memories are stored once they are made and solidified. During the initiation and maintenance of memory formation, the hippocampus acts as a trainer for the memory trace – much like arm bands you use to learn how to swim. The hippocampus activates the memory trace to strengthen the connections between neurons – allowing them to practice their strokes without the consequence of sinking. As time goes on, the trace becomes more solid due to LTP between the synapses of the neurons involved. After a few months to a year, the hippocampus is no longer needed to activate the memory trace as the pattern in engrained – like taking off your armbands and being able to swim confidently. Therefore, in patient HM, his long-term memories from about a year prior to his surgery could be accessed as they did not require hippocampal activation to be remembered.

Your memories are basically routes through your brain, with strong connections between neurons allowing many aspects of an experience be pulled together. However, these traces are not completely permanent, and actions can help or hinder your brains memory. Now we know how memories are made in the brain, some of my future posts will explore how we can improve memory formation, why some things are easier to learn than others (like why can I remember every lyric to that annoying pop song from 5 years ago but not my revision notes for my big exam tomorrow?) and what processes can lead to memory loss. Our memories are one of our most powerful tools, and making the best use of it requires training and strengthening of neurons. Keep an eye out for the neuroscience of making the most out of our number one weapon.

For more on memory, check out my website and this review.