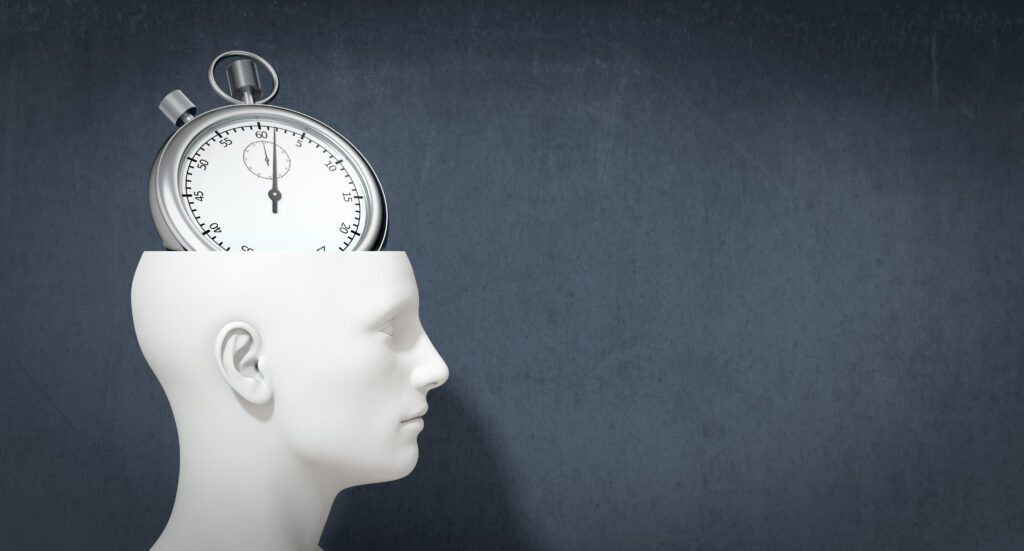 Can you believe we are almost in the 10th month of 2020? For me, this year has absolutely flown by. But when I first went into lockdown, each day seemed to drag – it felt like my last experiences of “normal life” were miles into the past. Even though each day is the same length, some seem they’re over before they’ve begun whereas others feel like a week rolled into 24 hours. The root of these differences is down to your brain and its perception of the passing seconds, minutes and hours. It is proposed that instead of following the rhythmical ticking of the clock, we judge time based on the level of processing our brains are doing in a given moment. Although it is still debated how this is measured in the mind, this theory could explain why we sense time differently depending on what we are experiencing.

Time warping (sadly not the Rocky Horror kind) can be felt on a daily basis and upon reflection because we perceive time in two ways: in the present and in retrospect. And both of these things contribute to an overall perception of how long a set experience felt. A psychological theory which describes this interplay between present and memory in time perception is called the ‘Holiday Complex’. This describes while when we are on our holiday, the time seems to fly in such a way that no sooner have you arrived are you packing your bags to go back home. But reflecting on the holiday, it can often feel like you were there much longer because of the many new memories you have made. This theory may also explain why as we age, it seems each year passes by quicker as less novel experiences are had since when we were young and constantly making new memories. So when thinking of how long time lasts, both our brains experience of our current reality and the long-term memories its forms during than event dictates how long we perceive time to be.

There are several things we know to change how we perceive time, whether that be speeding it up or slowing it down. These include emotion – a 30 minute filling at the dentist feels very different to watching your favourite show on Netflix for 30 minutes – especially fear. When experiencing that feeling of shear terror, time appears to slow down – meaning 1 minute feels like many. This is believed to be because the brain goes into a survival mode – trying to look for any opportunity to get you out of the threading situation. It has also been reported body temperature can impact time perception; with a fever making time pass slower whereas extreme cold speeds minutes up.  This negative correlation between body temperature and time perception has been proposed to be to do with changes to your state of arousal. And finally, attention impacts how fast or slow the minutes tick by. When you are focused and engaged on a task, time appears to pass quicker but when you are bored or disengaged, time drags. These mental and physiological processes are just some known to warp our perception of time.

In terms of how our brains measure time, a few regions have been indicating in studies looking at brain regions in individuals with time perception dysfunction. Some brain regions indicated in keeping our internal metronome are the cerebellum (an area at the back of the brain vital for the coordination between the brain and body), the prefrontal cortex (right at the frontal which is involved in attention, planning and short-term memory), the basal ganglia (a group of small brain regions which act as a “brake” on movement) and the anterior insular cortex (a brain region vital for interception; the measuring of signals from the body like heartbeat and directing adjustment if necessary). Each of these regions has been associated with tracking different lengths of time – with the cerebellum logging milliseconds whereas the prefrontal cortex counting seconds – but no individual ‘clock’ has been found in the brain. More recently, fatigue of neuronal activity in the right supramarginal gyrus was shown to correlate with the level of time distortion in humans; potentially providing a region responsible for altering our present experience of time. Plus new research in rats found activity in a brain region called the lateral entorhinal cortex correlated with the amount of novel experience in an event; suggesting retrospective perception of time is elongated based on the level of new experiences we have during a period of time. This research is all still relatively new, so it will be interesting to watch what comes out next!

Although the clock and how all this time is measured collectively is still unknown, one suggested reason for altered time perception is we sense our minds time over real time – meaning the speed of processing in our brain could be what underlies how fast or slow we feel time going. If you imagine the brain has a “tick” which varies based on how fast or slow it is processing information, this could provide varied times for different experiences. For example when your brain is in ’survival mode’ (when you feel like your life is threatened), it is processing events, experiences, senses and memories quickly in order to let you find a way to survive. This would register as many ‘ticks’ in a short amount of time; making your brain feel like it is experiencing time more slowly (for example: 10 ticks in 1 second versus the normal 2 would make that second seem 5 times longer). All of these processes happening at a more rapid pace that usual may be what gives the illusion of time slowing down. We still do not know what “ticks” the brain is measuring to generate this illusion but it is a strong theory which could explain time warping.

So to make the most of your time, make sure you are doing novel things each and every day so the retrospective recollection feels like each day has been a fulfilling experience!

This article was based on the wonderful book “Time Warped” By Claudia Hammond – check it out for more on this topic. Plus for more brain science, see my YouTube!

Nice! I learned something new. I like your style of writing this!