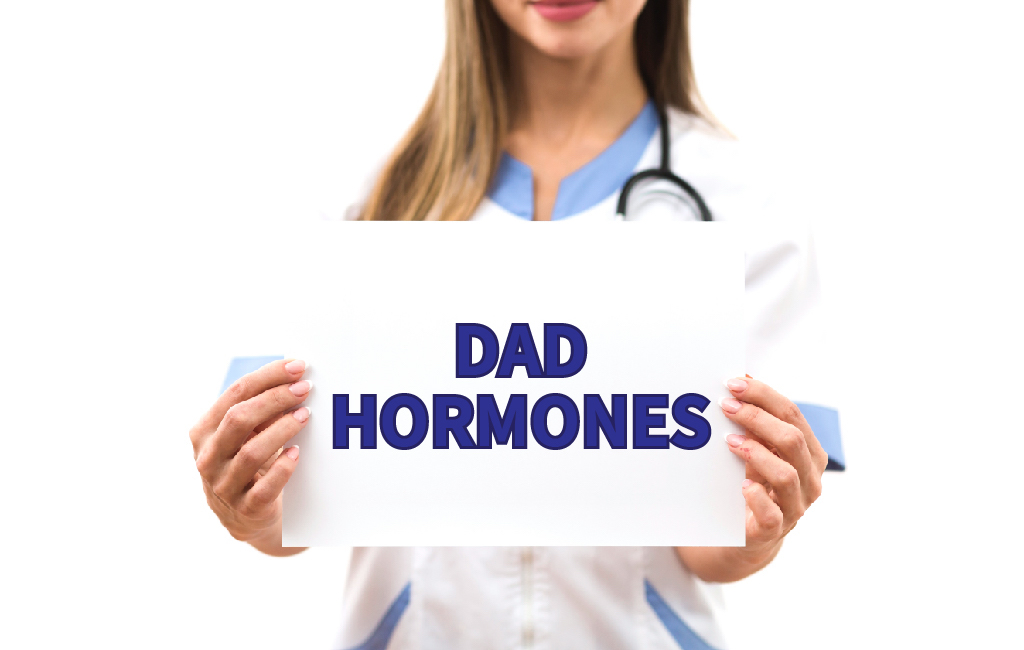 When we think of bodily changes associated with childbirth, we generally think of women. And for good reason. Pregnancy, childbirth, and breast-feeding all cause significant changes to a mother’s body. But it may be surprising for many of us to find out that men go through various changes when they become fathers. In fact, research shows that both parents experience a similar form of hormonal and emotional change in their bodies irrespective of their gender.

It’s well-established that mothers undergo a significant hormonal shift while going through pregnancy and childbirth, and again as they breastfeed. But men also go through hormonal shifts when they become fathers.

Psychologist Elizabeth Gould and her colleagues from Princeton University conducted a series of studies that show a significant increase in oxytocin, estrogen, and prolactin in fathers. This research also showed that after men become fathers, the levels of testosterone in their body generally decreases. To understand what that means and why these changes occur, let’s take a look at each hormone and its functions.

Testosterone often gets a bad rap as the primary hormone related to aggression in men. But the truth is, this hormone is far more complicated than that. It’s the primary sex hormone in men responsible for developing male reproductive organs, along with other physical traits such as increased bone and muscle mass, and body hair growth.

In the first weeks of a child’s birth, testosterone levels drop, along with cortisol levels. It’s thought that this contributes to their ability to bond with their infant and makes them more responsive to the family unit as a whole. In evolutionary terms, it was necessary for the father to be able to connect with their offspring since infants are highly reliant on their parents for most of their childhood. It also helped support the mother having more than one child at a time, which was often necessary for gene survival as the child mortality, and even mother mortality rate was much higher.

But the benefit of lower levels of testosterone doesn’t benefit just the father-child relationship. A study done in 2017 at the University of Southern California showed that men with lower testosterone levels were also shown to support their partners more, leading to lower levels of postpartum depression in both men and women.

Oxytocin, known commonly as the love hormone, also increases in men after they become fathers. This hormone is responsible for increased bonding in humans and is key in developing empathy, trust, and building relationships. So it makes sense that during the weeks after childbirth, oxytocin levels would rise in both mom and dad while they bond not only with their new infant but in their changing support of each other.

Fathers who are more hands-on during the initial weeks after childbirth show spikes in their oxytocin levels. Not only does this promote and strengthen the emotional bond, but it also lowers the release of the stress hormone cortisol. Combined, this makes men more responsive to the emotional stress of both the infant and the mother, allowing them to be more attentive and caring.

Elevated oxytocin levels also contribute to lower postpartum depression in men. While maternal leave is common, paternal leave isn’t quite as mainstream yet. This means men often are expected to return to work, sometimes even within days of welcoming a new addition to the family. They not only experience reduced bonding time, trying to get enough sleep while supporting their spouse can be difficult. These factors, along with several more, contribute to one out of ten men experiencing postpartum depression. However, early research shows that oxytocin therapy can significantly reduce these symptoms while boosting the bonding men feel with their new child.

The good news is this oxytocin spike isn’t shown in only those first few weeks. Studies have shown that throughout a child’s life, men experience spikes in oxytocin when engaging in play with their child, from infancy all the way through childhood, promoting an enhanced, life-long bonding experience.

Prolactin is most commonly associated with lactation, but that isn’t its only function. It also lowers libido and increases responsiveness to anxiety, both of which support focusing attention on the newly formed family unit. New studies are showing that this hormone, formerly known as the mom hormone, is shifting to becoming the parent hormone, as men experience increased prolactin levels in relation to becoming fathers.

Recent studies are finding that prolactin may be the primary hormone responsible for parents being able to recognize their baby’s cry as individual and unique. When monitored, new fathers show a spike in prolactin when they hear their infant crying and in studies with both men and women, parents were able to successfully identify their own child’s cry when presented with several options.

And these changes aren’t temporary. Several studies have shown spikes in prolactin when they play with their infants and children throughout their childhood. Even more interesting, a study conducted in 2005 and spanning four years showed that fathers had higher prolactin levels than non-fathers, and though prolactin levels may fluctuate, it is possible to identify who is a father from prolactin levels alone.

Becoming a father brings about a lot of changes. Before, it was believed that most hormonal and emotional changes occurred in new mothers, but as research continues, we know that these changes impact new fathers as well. It turns out the brain naturally shifts the production of hormones to change itself in direct response to becoming a parent. And these changes make dads just as responsive, attentive and nurturing as moms. So be sure to give dad an extra hug or three whenever possible. His brain loves it.