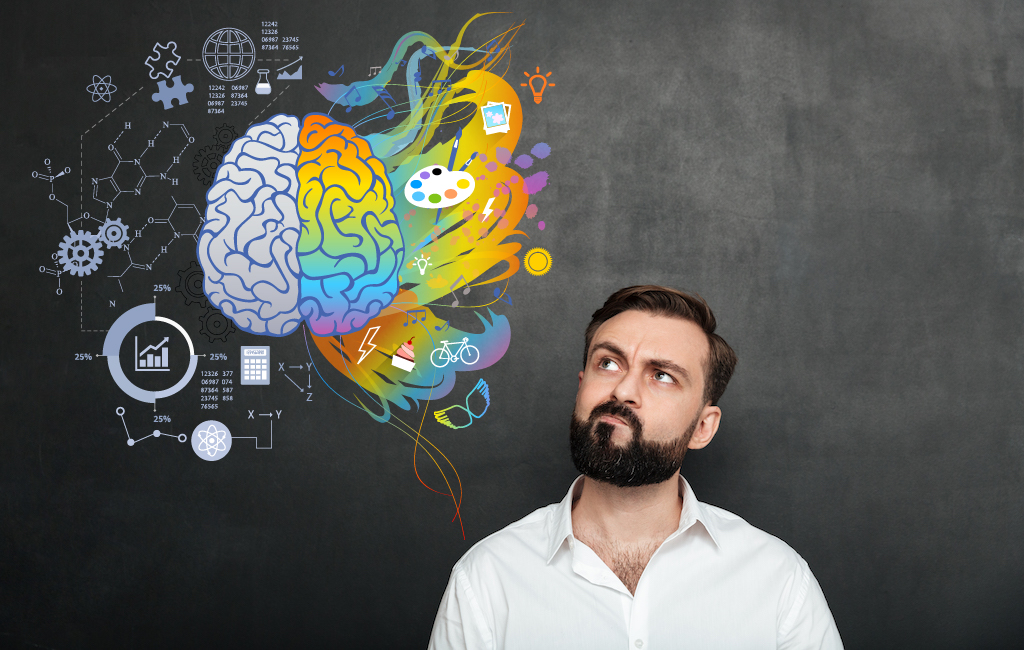 For years, the myth of the creative-right brain versus the analytical-left brain has been widespread. The phrasing is mentioned on television programs and in mainstream books, where we learn how to unleash the deductive logic of the left-brain or the hidden creativity of the right-brain. We’re even encouraged to take online tests to help determine which side is the dominant brain hemisphere complete with an infographic to post on various social media outlets.

People who score on the left-brain spectrum are described as the thinkers, with strong skills relating to analytical, objective, and logical thinking. Where right-brainers are the more creative types, with strengths in thoughtfulness, intuitiveness, and subjectivity. But for all the dominance in pop-culture, this popular theory is one of the many myths people have regarding the brain.

History of the myth

As with any myth, there are facets of truth embedded within. The left side of the brain has been shown through brain trauma studies to be tied with language, specifically speaking. But to say that means the right-brain is less verbal is ignoring the fact that to process language, multiple parts of the brain are required, making a right or left hemisphere distinction impossible from a neurological perspective.

So, where did this theory come from?

For the most part, a psychobiologist, Roger W. Sperry is credited with creating this theory. As part of a study treating refractory epilepsy, patients had their corpus callosum surgically severed. Composed of tightly wound nerve bundles, the corpus callosum is how each hemisphere of the brain connects and communicates with the other. When this communication pathway was cut, Sperry noted that patients experienced other symptoms, such as being unable to process specific things when viewed from either the right eye or the left.

Because we know that the right eye feeds the left hemisphere and vice versa when Sperry noted that patients were unable to “see” words when shown through their left eye. This led Sperry to theorize that speech occurred in the left hemisphere. However, while patients couldn’t articulate seeing words, they could choose the object without understanding why they picked it up. Through more experiments, he determined the functions impacted by each side of the brain, creating the characteristics we associate with being right or left-brained.

What does the research say?

However, further research proves that the brain is not as dichotomous as Sperry’s theory indicates. Take math as an example. While math is largely credited with being a left-brain logical-thinking skill, math requires using several different types of thinking utilizing multiple areas of the brain ranging across both hemispheres. Even language is more complex. While it’s true that specific language functionality such as speaking is found in one area of the brain, processing the complex layers of language is a process involving the whole brain.

In fact, after a two-year analysis, a team of neuroscientists found through magnetic resonance imaging that there is no indication of anyone using their right or left side dominantly. Even in tasks associated with one hemisphere over the other, multiple areas of the brain were also lit up, proving that our brain functions as a whole unless it is forced to operate separately.

Simply put, the pop psychology notion doesn’t capture the working relationship between the two sides. Some brain functions can occur on either side of the brain, but it’s a limited and limiting analysis. Our brain processes the world around us by utilizing several areas at once and rarely is anything in our brain associated with a single function.

How we think and process information is a complex process that cannot be summed up with a bright infographic or captured in an internet quiz. Instead, we are both right and left-brained and are capable of harnessing either our creative strengths or our logical reasoning skills at any time.