The Best Cell Service: Brain Cells and their Chat

The Best Cell Service: Brain Cells and their Chat 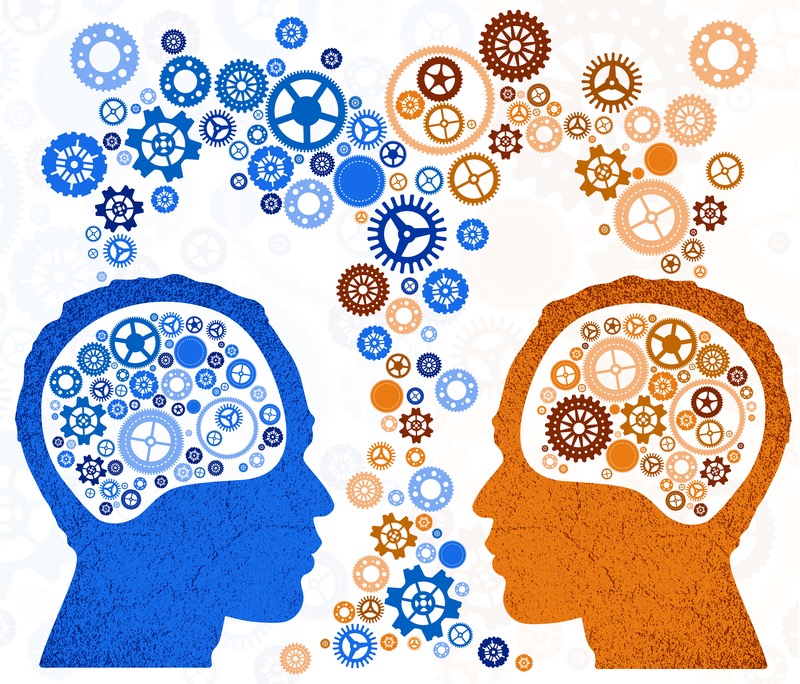 Have you ever zoned out of a situation and experienced a complete mind blank? Your thoughts drift elsewhere even though you know your attention should be in the present moment. Some of these blanks can happen when you’re reading a dense book, watching a tv show whilst scrolling on your phone and even when someone is talking directly to you. Your brain checks out and diverts your attention to something it believes to be ‘more important’. Although this can come across somewhat rude in person, solely processing the most vital information is actually the way the cells in your brain communicate with each other. These cells are programmed to ignore the benign and only pass on important messages to make your brain talk as accurate as possible. Cell conversations can’t quite be compared to how we communicate, as instead of relying on words and gestures to get their point across, brain cells use electrical and chemical signalling to chat. Your whole-self relies on this finely-tuned signalling system to keep you alive. Basically, your cranium has no time for small talk

Your brain is like a planet packed with billions of cells and these residents work both independently and as a collective to keep your personal macrocosm thriving. Some of these cells are the ‘key communicators’ within the brain whereas as others are vital in maintaining a healthy environment for this life-giving chat to take place. The chatterboxes are called neurons and the maintenance managers are called glia.

Neurons (also called nerve cells) are responsible for receiving information, processing it and passing it on. Neurons are able to perform these functions due to their unique shape. At the top of the cell, neurons have many processes called dendrites. Dendrites are the feelers which receive information from not just one, but many other neurons. A single neuron can receive inputs from thousands of other neurons – imagine the concentration you’d have to have to listen to that much info all at once?! The point where one neuron meets another is called a synapse aka. the site of neuron conversations. 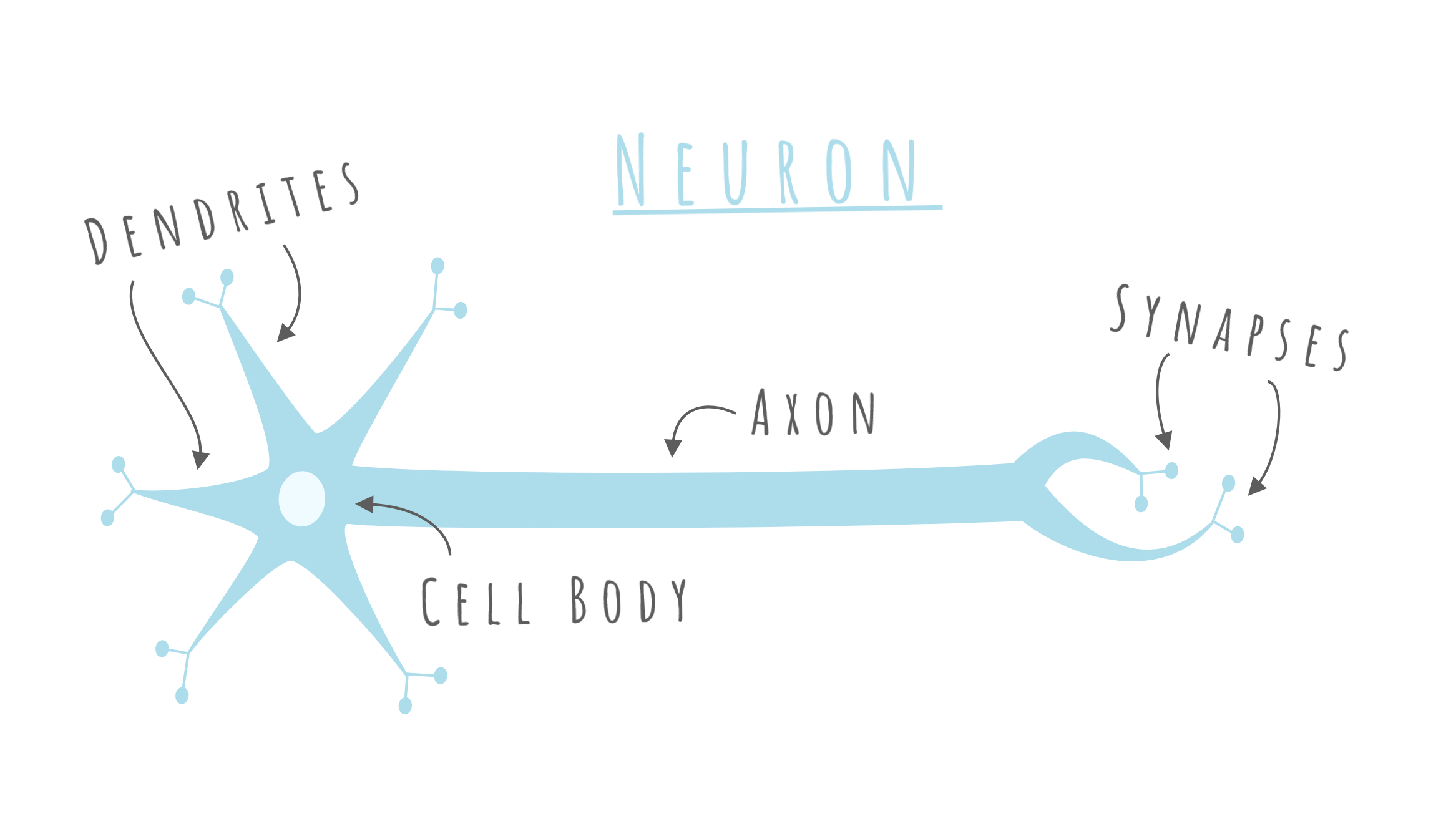 Once a neuron has received a signal, it is passed to the cell body and processed alongside other incoming signals. If many signals make it to the cell body at a similar time, the neuron is triggered to pass the information on. This is done by sending a newly derived signal down the axon. Unlike dendrites, each neuron only has one axon – like a single road out of a city. This axon can branch so can come into contact with many dendrites from neighbouring neurons, but the signal they receive will be the same – spreading one message to many new places. The end of the axon branches are where synapses are formed and signal transmission takes place.

All neurons have these morphological features but can look very different depending on their function. For example, neurons in the cerebellum called purkinje cells have HUGE numbers of dendrites because they need to receive lots of signals in order to control muscle movement. This makes them very effective listeners and also super pretty!

Glia
Glial cells are the office managers of the brain. There are many different types of glial cells with specific jobs to keep neuron signalling tip-top. Some of these jobs include clearing up debris and rogue proteins (microglia), regulating the movement of chemicals into the brain from the blood (astrocytes) and acting as insulators to speed up neuron signalling (oligodendrocytes). There are approximately equal numbers of glial cells and neurons in brain – highlighting just how important a tidy and well-kept environment is for productivity! 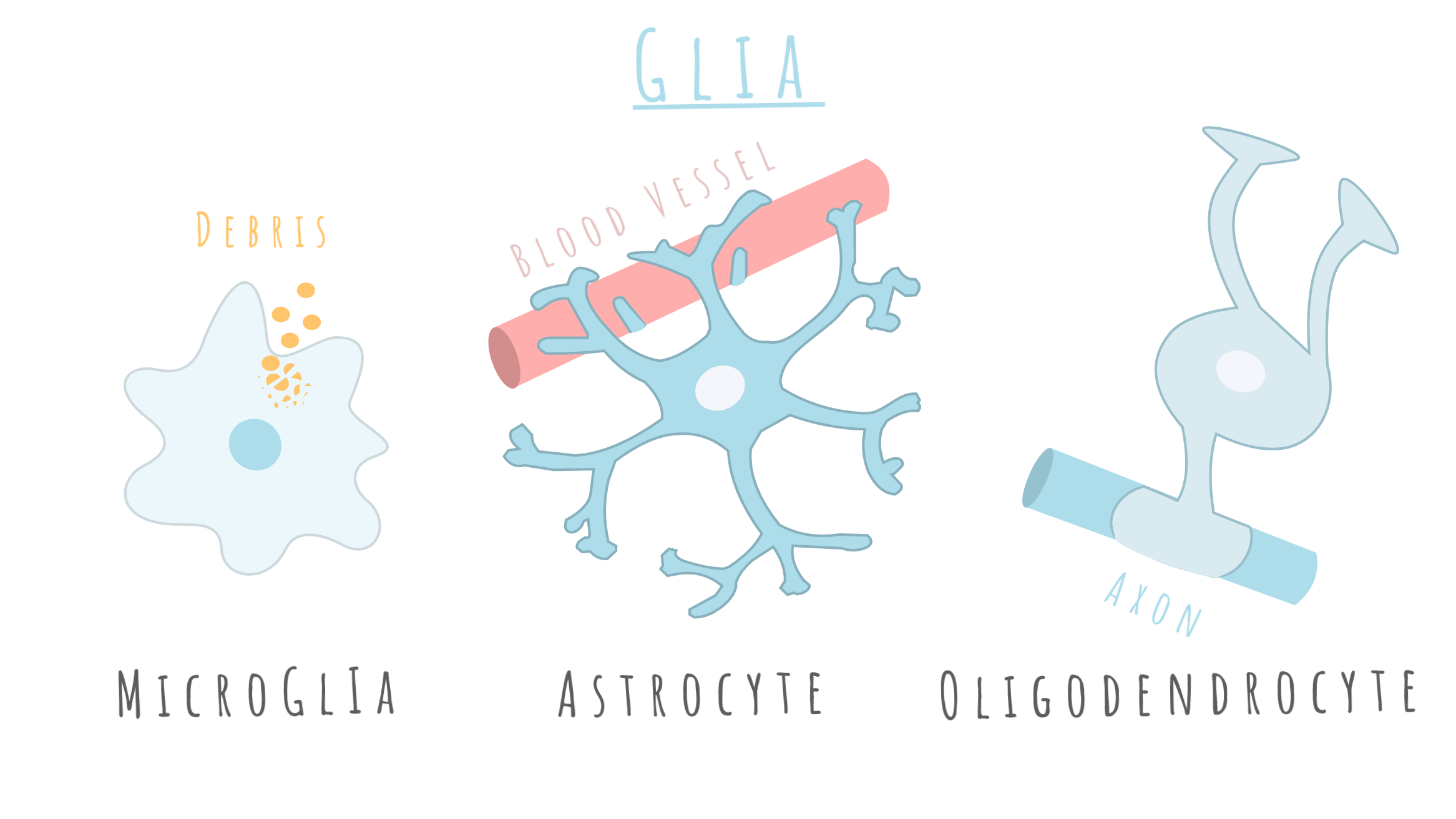 Neurons are constantly chattering using electrical signals. These signals are called action potentials and are triggered by charged particles (called ions) entering into the axon of a neuron. Your brain is packed with ions which differ in levels inside and outside cells. This difference is charge creates potential as much like us, ions are always seeking to be in a balanced state so want to move towards where they are in low numbers to even themselves out. Ions enter the cell via gateways between the inside and outside of the cell called channels. These channels are opened by changes in charge within the neuron, so you get a ‘Mexican wave’ effect of channels opening down the axon as the signal passes along. As positive ions flow into the cell (purple ions), others promptly leave (green ions) – producing a sharp ’spike’ of positive signal (which is always the same size!). The neuron then adjusts the ions back to their normal position so it is ready to go when the next signal comes along. 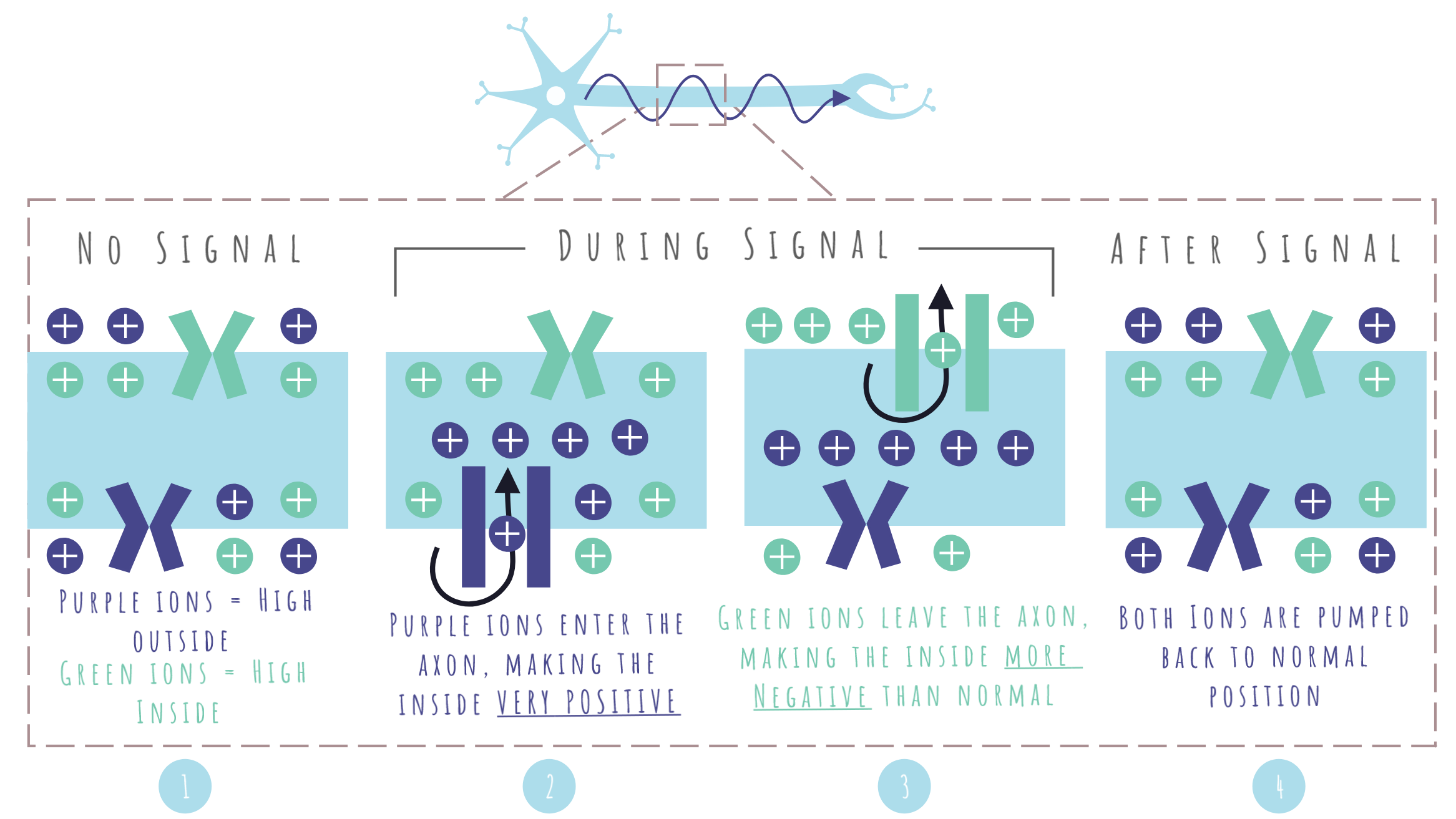 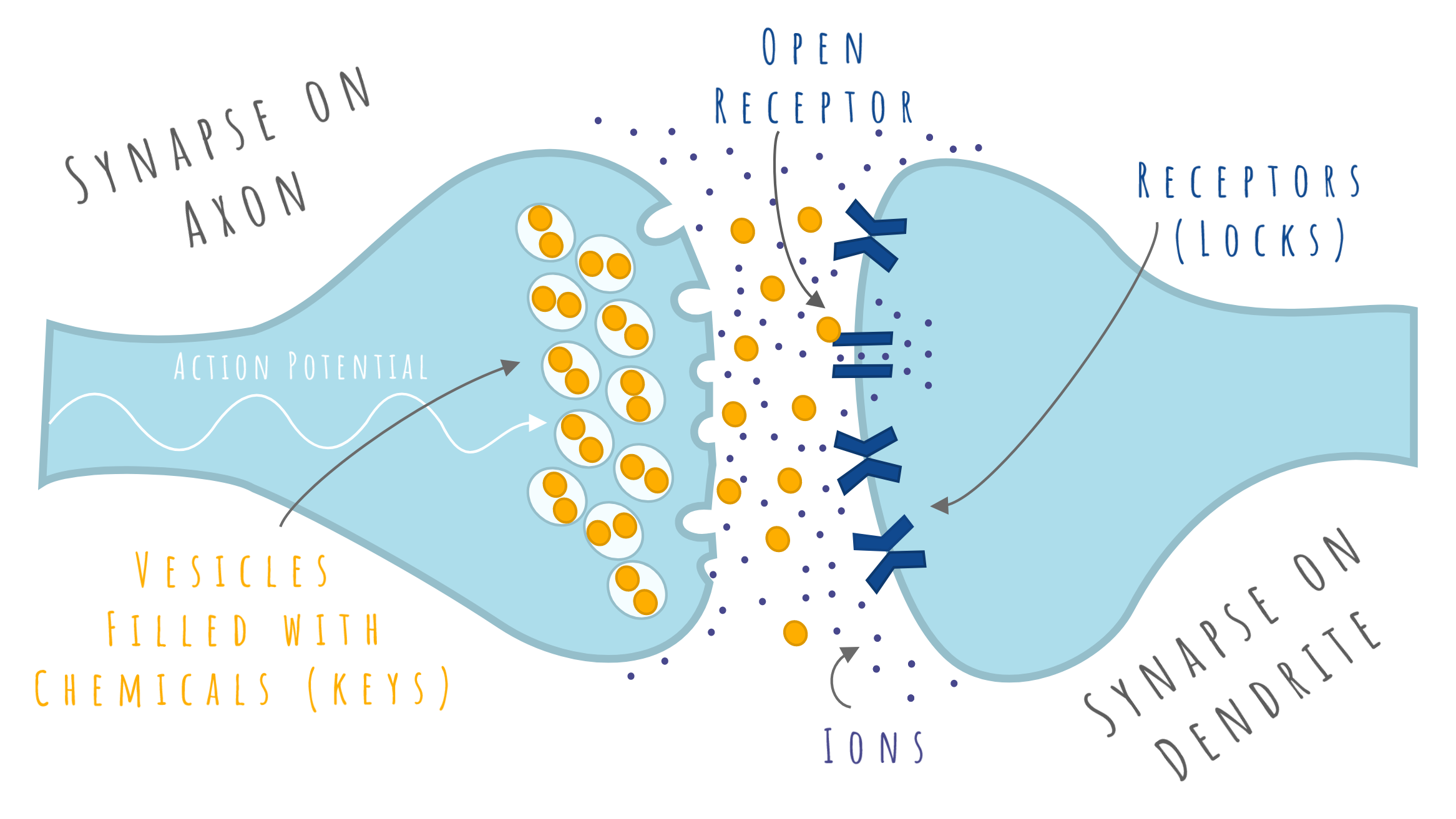 No Cold Calls Allowed
Neuron signalling requires a lot of energy and not just any old message can get passed on. Therefore, neurons have a few criteria for selecting important messages at the synapse. These include the size of the signal received at the dendrite (long signalling period = more important) and the persistency of the signalling from the sending neuron (many small signals following each other = also important). This stops false or insignificant messages being spread through your brain.

Neuron chat is one of the most important forms of communication we humans need to stay alive and this top-notch process is facilitated by a neuron’s shape, ions and maintenance of the environment by glia. If your neurons passed on every single signal they received, your brain would be so noisy that really important signals would be missed and you would not be able to function. So zoning out of the conversation is definitely excusable in your brain!

For more deets on neuron signalling, check out my website page!