Sweet Tooth: Can Your Brain Become Addicted to Sugar?

Sweet Tooth: Can Your Brain Become Addicted to Sugar? 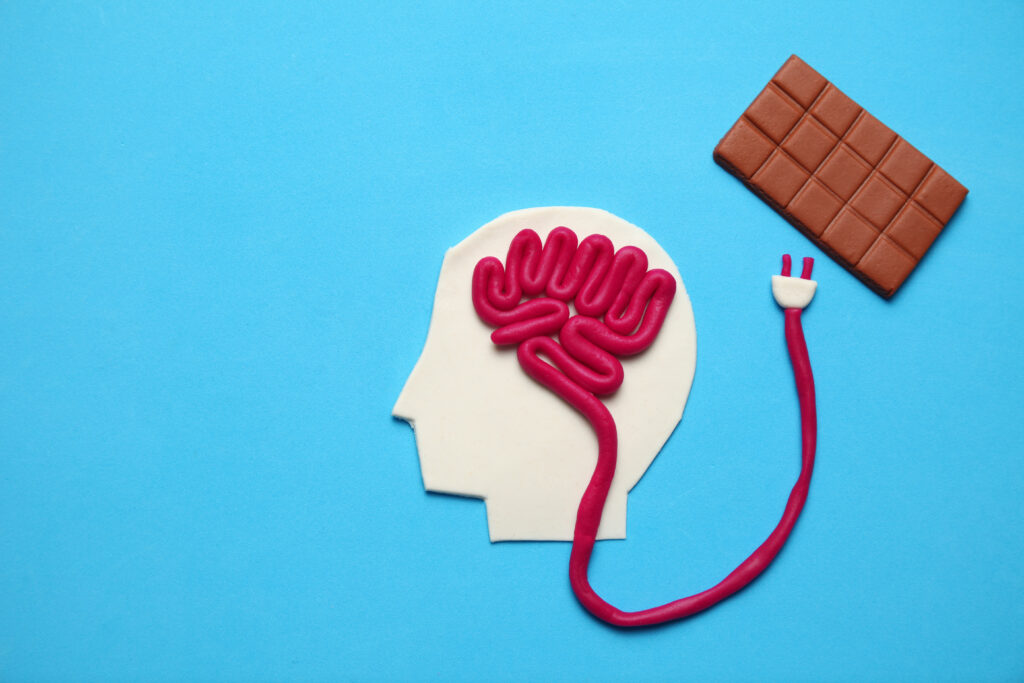 Are you a sweet or savoury type of person? Whether your preference is for salted or chocolate chips, you have most probably experienced a sugar craving at some point during your life (or day!). Usually a craving kicks in when your body is low in sugar or if you have just eaten a sweet snack. The latter of these scenarios leaves you in a state of wanting more and more candy to scratch your sugar-surged itch. This craving is not because you physically need sugar but because your brain recognises sugar as something ‘good’, and pushes you to devour the entire pack of sour gummy worms. The circuit involved in sugar craving is similar to that found in heavier addictions, revealing why it can be so difficult to stop yourself reaching out for another Herseys Kiss. But can your brain actually become addicted to sugar? Science suggests overuse could lead to some addictive-like behaviours.

Your brain is an energy-consuming machine. As one of the most output-heavy organs in the human body, your brain needs fuel to function. The main source of energy your brain requires to work properly is glucose. Glucose is a type of sugar, and in the brain, glucose is used to help brain cells (neurons) speak to one another as well as to be healthy in their ‘resting’ state. Although glucose is a sugar and we associate sugar with sweet treats, glucose is found in the majority of foods including fruits and vegetables. Your body and brain need to constantly be ensuring your have enough glucose in your system to keep you going!

When we eat, glucose is formed by breaking down food. The main food group which provides us with glucose are carbohydrates, as these are all completely broken down into sugar molecules. Although carbs are found in most foods, processed treats like chocolate and candy have a much higher percentage of sugar per gram – meaning we get more sugar for our bite!

When we eat a food rich in sugars, these molecules are able to enter the bloodstream and lead to a ’spike’ in blood sugar. This spike triggers the release of insulin, a chemical which helps cells all over the body absorb glucose for fuel by acting as a ‘key’ to open up the membrane surrounding the cell to let glucose in. Insulin also ‘mops up’ excess glucose to bring our blood sugar level back down to normal. The consequences of having high blood sugar are disastrous for the body as long-term elevated glucose in the blood can damage blood vessels; leaving a person at risk of heart and vascular diseases, stroke and problems with their nervous system. Too much sugar in your diet can compromise your insulin sensitivity and individuals with diabetes who can’t make insulin or don’t respond to it properly have to self-administer to keep these blood sugar levels down.

Your brain is an important receiver of glucose from food due to its high energy demands. When glucose passes from the blood to the brain, your brain generates a signal to inform you ’this is good, we need this’. This signal is mediated by dopamine; a chemical often associated with ‘pleasure’. When glucose arrives in your cerebrum, dopamine is released from an area in the midbrain (ventral tegmental area) and received in the nucleus accumbens; a brain area associated with reward and motivation. Dopamine is now known to not necessarily mediate the sensation of pleasure, but more the motivation to seek out pleasurable things. If dopamine is released in the nucleus accumbens during an experience, like eating a chocolate bar, in future when you come across a chocolate bar, dopamine will be released in your brain before eating to motivate you to rip the wrapper off and devour the smooth substance.

Gimme More: How Your Brain Reacts to Food

We have learnt a lot about the chemical consequences in the brain as a result of food intake from animal models. For example, we know dopamine is overall important for feeding behaviours as mice with dopamine removed from their system show a reduced want for water and food.The ‘seeking’ actions have also been shown in the mouse brain, as when mice are required to press a lever to receive their food, dopamine is released into the nucleus accumbens during this action.This learning mechanism regulated by dopamine also explains why peaks in dopamine during feeding are normally only observed when eating a new food. These signals are teaching your brain ’this food is good’ and once the brain knows this, dopamine release is no longer needed whilst eating that particular item.

Once you have finished eating, another chemical called acetylcholine is released into the nucleus accumbens as a ’STOP, I’M DONE’ signal. When mice have the cells removed which produce acetylcholine in this region of the brain, food intake increases – showing the loss of the stop signal. If a food is not liked by an animal (something we call an ‘aversive’ food), dopamine levels drop whilst acetylcholine levels rise in the nucleus accumbens, removing the ’seeking’ training you get from ‘good’ food. Together, our brains can learn to like certain foods based on their ability to induce dopamine release.

Sugar Rush: Can you be addicted to sugar?

You often hear people say ‘I am addicted to Netflix’ or ‘I can’t stop reading this book, it’s addictive’. A common ‘addiction’ described by many is the addiction to sugar. But is this a biological addiction or just an excess liking towards candy and cakes? The formal definitive of an addiction is a brain disease induced by compulsive substance use despite harmful consequences. The harmful consequences are the main thing to focus on with an addiction – as harming ourselves goes against the evolutionary aim of ‘survival’. Sugar is known to induce the release of opioids in the brain of rodents; substances which are taken for pain relief and can become addictive with over-exposure. It is known mice will withstand unpleasant experiences to get food, but it is unclear whether this is specific to sugar or driven by their need for other nutrients.

We can further model whether sugar is actually addictive using rodents by exposing them to sugary substances for 12 hours a day over three weeks. This model leads rats to develop ‘binge-like’ behaviours as they increase their sugar intake over the time period of the experiment, suggesting their tolerance for the sweet stuff has decreased and they need more to get a ‘hit’. When rats are deprived of sugar, they will continually press the bar which normally delivers their food; implying they are craving the substance in its absence. When dependent rats are withdrawn from sugar, they show anxiety-like behaviours, comparable to humans who face withdrawal from an abusive substance, as well as a decrease in dopamine with an increase in acetylcholine is seen in the nucleus accumbens, a mechanism also observed in people withdrawn from morphine. Rats on sugar are also more sensitive to other drugs like amphetamines; a common phenomenon seen in people addicted to drugs called ‘cross-sensitisation’. The animal work produced in this area is implying some of the damaging actions associated with addictive behaviours do apply to over-exposure to sugar.

However, there are some mechanisms seen in drug addiction which do not seem to cross over to sugar consumption. When a drug is taken, dopamine is released with every hit from the ventral tegmental area to the nucleus accumbens, whereas with food and sugar, the dopamine released during feeding decreases the more you eat a particular food (although intermittent sugar exposure in between periods of absence do induce dopamine release. Individuals addicted to drugs have a decreased ability of dopamine to bind to a receptor known to be activated by antipsychotic drugs – mechanisms not shown in sugar addicted animal models yet. Food intake also has the satiety system (aka the ‘I’m full’ signal) to stop overuse which drugs do not activate. It is though that if addictive behaviours related to sugar exists in humans, it will only be in those with genetic alterations to their dopamine system who are actually effected; a much smaller proportion compared to the many who claim they are addicted to chocolate!

Sugar serves as a main energy source for your brain and is necessary for our survival. However, too much sugar could potentially alter your brain to unhealthily ’seek’ out your next sweet treat. It will be interesting to see how this field develops with the increased advances in human brain imaging. This will hopefully tell us more about our brains relationship with sweets and if we can really be hooked on sugar!

For more on how your brain works, check out my website and YouTube. And to learn more about our brains on sugar, try this review!