Smile and Wave: What Happens in Your Brain When You Sleep?

Smile and Wave: What Happens in Your Brain When You Sleep? 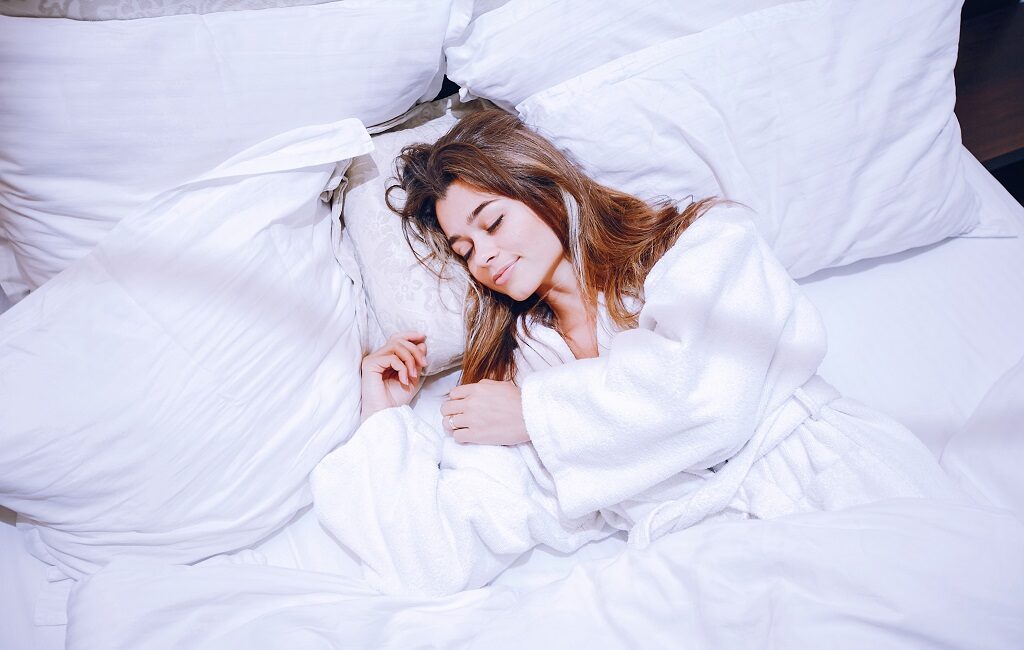 There is nowhere comfier than your bed when your morning alarm goes off, am I right? You are cosy, warm and just wishing you could drift back off to the land of nod. But if you actually think about sleep and our necessity for it, it is quite a strange concept. We spend almost a third of our lives in the unconscious state of slumber, which evolutionarily lost us time for working and advancing our species as well as leaving us vulnerable to predators and the elements. However, sleep is conserved across the majority of species, arguing it’s importance to our survival. And while you may be immobile as you are catching zzz’s, your brain is pretty alive and active; processing the day just passed and carrying out essential maintenance. So night goggles on – Lets look inside our noggins during a night of sleep!

When you lay yourself down for your night of rest, you brain goes through 2 different sleep states: Rapid-Eye Movement (REM) and Non-REM (NREM) sleep. These states occur in a routine order, repeating every hour and a half – meaning you experience about 5 sleep cycles per night. REM and NREM sleep states are defined by your brain wave activity; a representative of the firing activity (chatter) of the neurons in your cranium. If you attached electrodes to your head whilst you were rushing around at work, your brain waves would be recorded as short bursts in random patterns. We call these desynchronised wave patterns beta-waves and they represent your many synapses firing at different times across your brain; taking in information, processing your actions and keeping you alert. On the other hand, if you checked in on your neural activity when chilling at a spa, you would find that the manic bursts witnessed at work have been substituted for much slower, synchronised brain waves called alpha-waves. These waves symbolise a relaxed, less-bust brain, because whose worrying about that deadline when surrounded by nice-smelling oils and whale song? 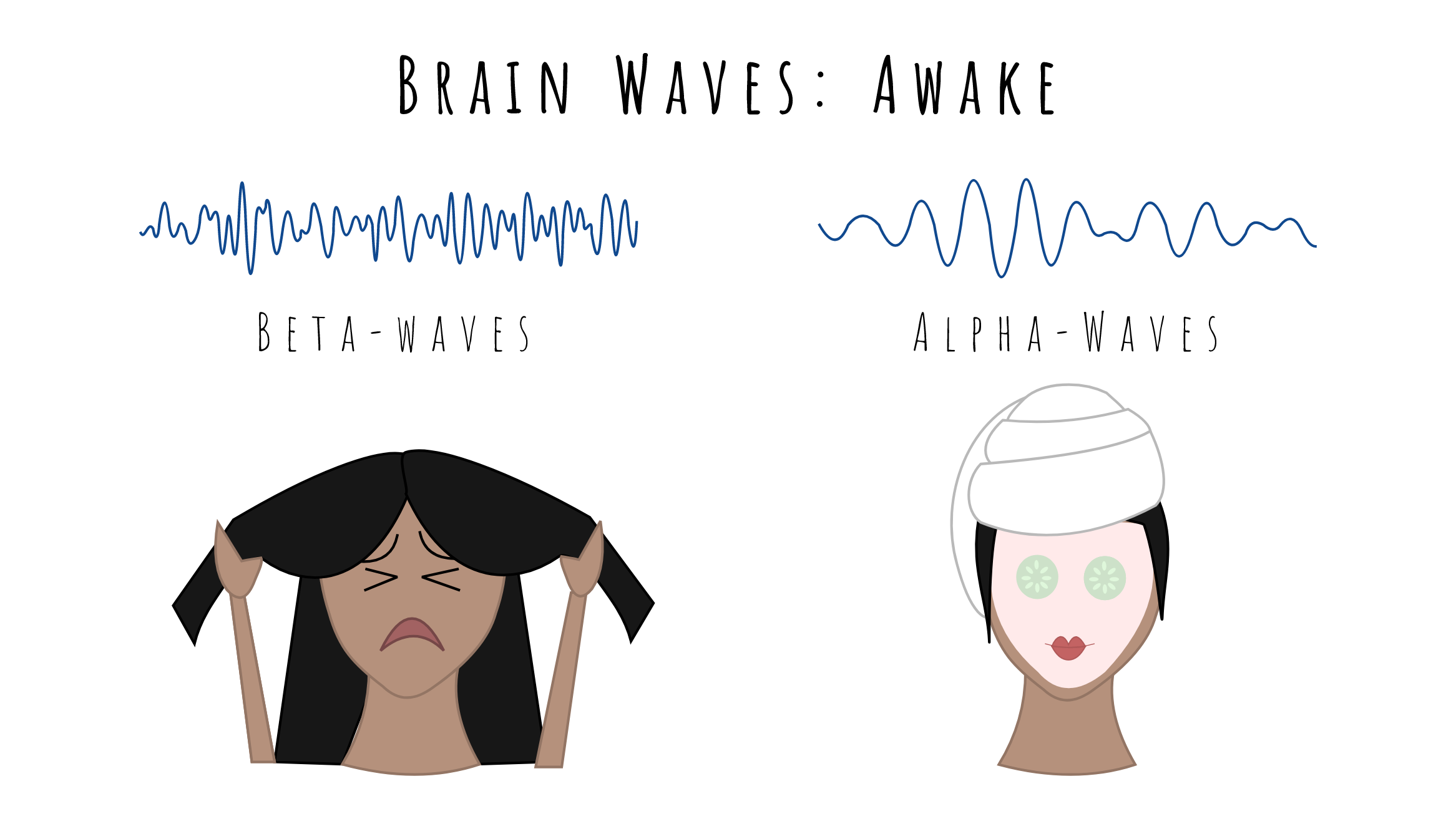 If you were to monitor brain activity at night time, your waves tell a very different story. The different wave forms mean sleep can be split into 5 different stages:

The first stage of your sleep is the nodding off you do when on a warm train ride or in a not-so-thrilling meeting, when you can be rapidly startled back to reality with a sudden brake or a booming voice. The transition from being awake to drifting off is due to the slowing down of alpha wave (relaxed brain) activity. These slower wave variants are called theta-waves and they further synchronise synaptic activity. Stage 2 sleep is defined by continuing theta-wave activity with a few added features. This includes the presence of sleep spindles; increasing the frequency (length) of each wave; and k-complexes; increasing the amplitude (height/size) of each wave. These stage-2 features occur every few minutes, differentiating stage 2 from stage 1. However, a disturbance during either of these light sleep stages will shift your brain back into its alert and awake mode.

The deep sleep stages of sleep are defined by another wave pattern: delta-waves. Delta waves are huge in amplitude and reallllllyyyyyy sloooooow; depicting the super-synchronous firing of neurons across the brain. Stage 3 and Stage 4 are differentiated by the number of these delta wave they have, with stage 3 having less than 50% and stage 4 having over 50%. As these big waves are so distinct from the short bursts of activity your brain experiences during wakefulness, a jolt to reality at this point in your sleep cycle can leave you completely disorientated. If your brain is in a delta-wave sleep when your Monday morning alarm starts blaring, you might physically feel like cannot wake up. Stage 3 and 4 of sleep are also the points in the night when you sleep talk or walk – a slightly terrifying thought considering just how unawake your brain is!

Your 90 minute sleep cycle goes from stages 1 to 4 and back up to stage 2. Finishing off the cycle is REM sleep. This type of sleep is characterised by involuntary rapid eye movements as well as an almost complete loss of muscle tone, leaving you in a near-paralysed state. The brain wave activity during REM sleep is most similar to your active and awake brain, consisting of short bursts of activity in desynchronised patterns. As each cycle completes during your night of sleep, the REM phase gets longer – meaning your brain gets more ‘awake’ the more sleep you get. This stage of sleep is also when you dream. As your wave patterns are similar to activity to your awake state, your brain can induce life-like simulations. But thankfully, due to that loss of muscle tone, you are prevented from acting out those wild, wonderful and weird dreams. 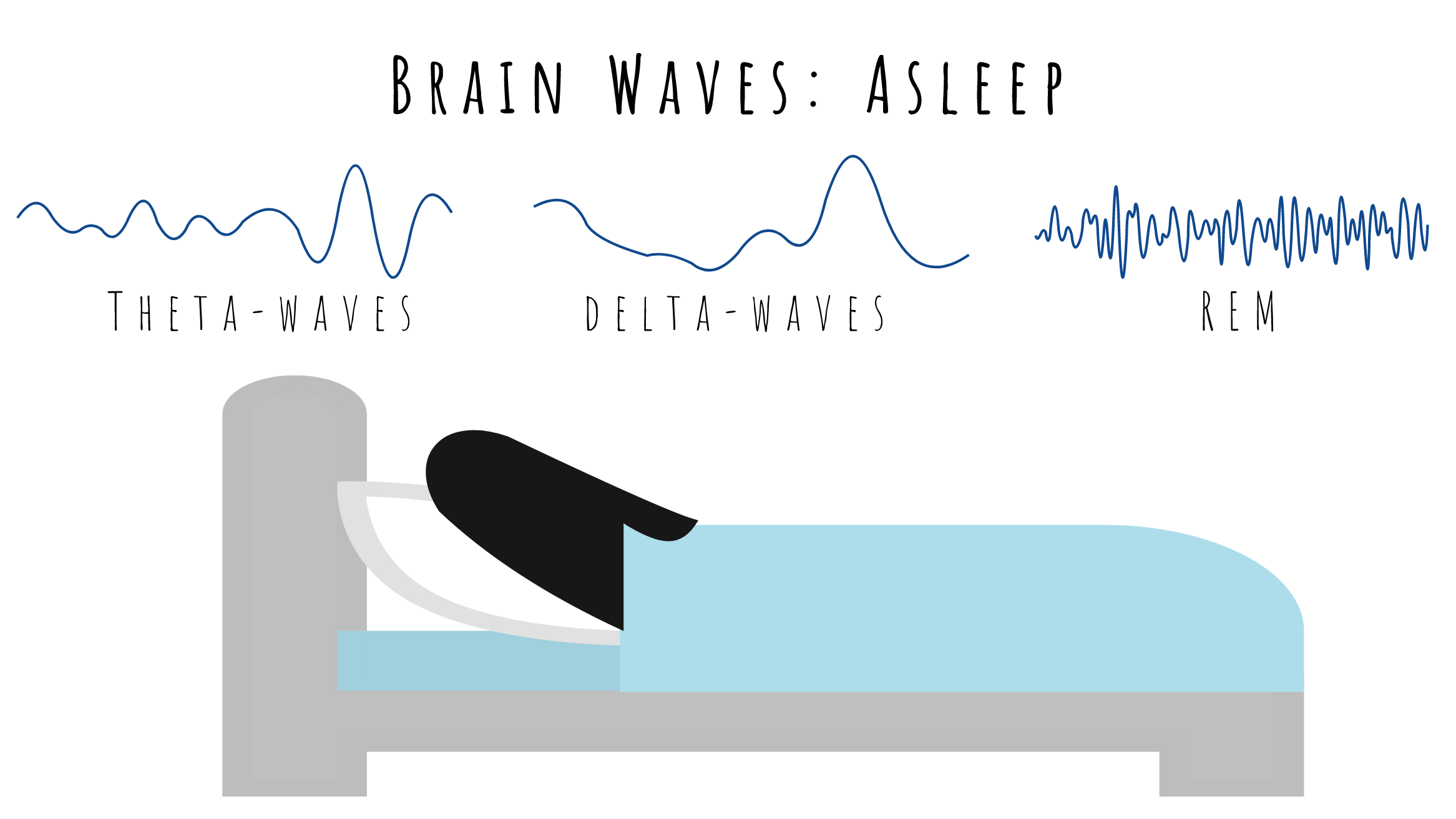 Each night you sleep, your brain is firing away in routine patterns; transitioning from a wakeful to trance-like state every 90 minutes. Now we know how the brain acts during our slumber, we can start to ask questions about why the brain needs sleep. The robustness of human functions such as memory and attention rely on a good night’s kip, and the development of many diseases have been tied to a chronic lack of sleep. See some of the research in these fields in upcoming posts! For now, make sure you get your 8 hours in and if anyone tells you off for sleeping in, just say your brain needs it.

For more on neuroscience, see my website and if you want more deets of sleeps, check out this review!