Meet Your Mind: An Introduction to your Brain

Meet Your Mind: An Introduction to your Brain 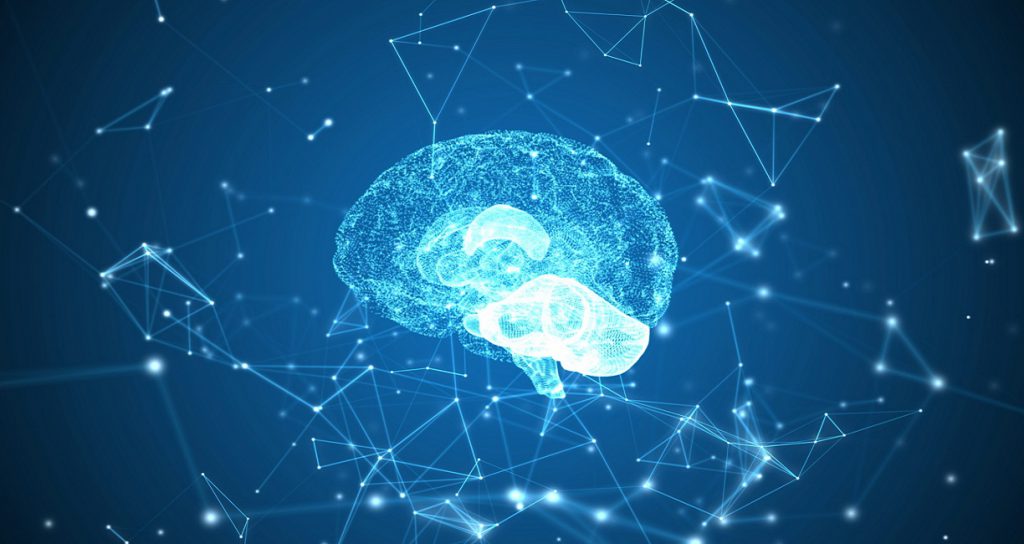 Welcome to the world inside your head. Underneath your skull exists a thriving planet of millions; communicating with each other, sending messages to the far corners of the body and exerting control over every thought, movement and feeling you have ever had. That’s right – your brain is not a single unit but a mass of hard workers performing specific roles to make you, you. Thanks to the development of advanced scientific techniques, we are finally able to take a peek inside our own head’s and begin to understand exactly how our brain’s function. While we still may only be scratching the surface of neuroscience, we now know a lot about the once-mysterious ’think tank’ and are beginning to uncover the biology behind our behaviour.

My name is Julia Ravey and I am a final year neuroscience PhD student here to feed all your basic brain-related needs as well as sharing some of the most up-to-date neuroscience research. My aim is to translate jargon-heavy, complex papers into digestible, comprehensible science so anybody can understand how their brain works. We are all keen on getting the max out of our mind but finding accurate, relevant info on how to do so can be tricky. Brain-related research reported in the mainstream media can often be sensationalised, which can lead to misinterpretation of science, spread of false information and result in unhealthy brain-style choices. Therefore, I hope I can act as your translator between the language of science and everyday conversation to report off-the-press neuroscience, discuss the future of brain research and most importantly, give a critical opinion on some of those fanatical claims.

My first series of posts for Kwik Learning will give you an introduction to your brain, the cells who live there and the underlying actions of some of our most human behaviours. So, welcome to Brain 101! Lets dive in with our orientation and get you formally associated with the structures critical to your cranium.

If you look at a human brain in it’s entirety, you can appreciate there are 3 distinct structures that can be picked out by eye: the squishy pink top, a bulb shape on the back and smooth stem underneath. These are named the cerebrum, the cerebellum and the brain stem respectively. Each of these brain regions perform very important functions, from determining your behaviour to keeping you alive. 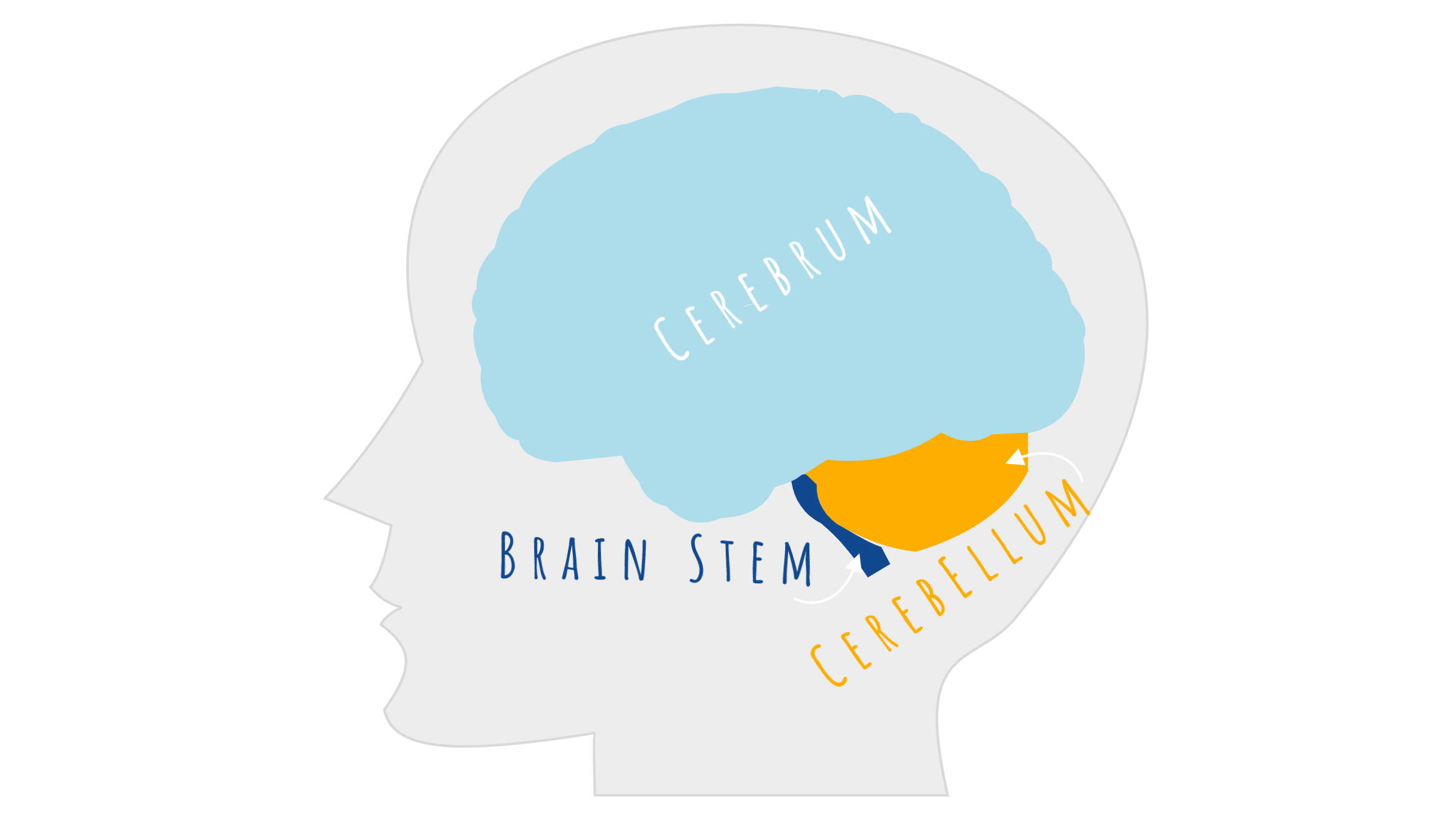 The brain stem is the wifi router transmitting signals from your remote-brain desktop to many muscle terminals via your spinal cord. The brainstem is also termed the ‘reptilian brain’ as it is a similar structure to the brain of our ancient scaly ancestors and is responsible for functions such as breathing, blood pressure control, heart rate and alertness. You know, just those small skills needed to stay alive…

The cerebellum – Your coordination centre

If you are constantly dropping your phone on your face or tripping over your own feet, you can partially blame your cerebellum. The cerebellum is responsible for co-ordinating muscle movements to produce a specific action, such as successfully hitting a tennis ball, and controls your balance. In order to stay poised, your muscles and your cerebellum have to constantly signal to each to update where your body is and adjust all muscles accordingly to keep you upright. The cerebellum  is  also the brain region behind ‘practice makes perfect’. Repeating an action trains your cerebellum to strengthen connections between associated muscle groups and makes the motion ‘more natural’ to perform with each try. So even if you haven’t ridden a bike in years, you could jump on one now and be on the move pretty quickly thanks to your cerebellum.

The cerebrum –  The ‘human’ element of your brain.

Also known as the cerebral cortex, this part of the brain is covered in folds (sulci (grooves) and gyri (bumps)) to allow a LOT of brain to be packed inside our skulls. With great area comes great responsibility, as the cerebral cortex is the site of complex behaviour and ‘higher functions’, such as thinking in the future and personality. Our cerebrum is much more developed than a lot of other animals and has given us our evolutionary advantage to climb to the top of the food chain.

Getting To Lobe You: Brain Lobes

As the centre for ‘higher’ functions which ultimately make us human, the cerebrum is in charge of a lot of complex neurological activity. And although the cerebrum may not look like it is made of distinct parts like the 3 brain regions discussed above, it is a highly ordered structured compromised of many different regions arranged in four lobes. 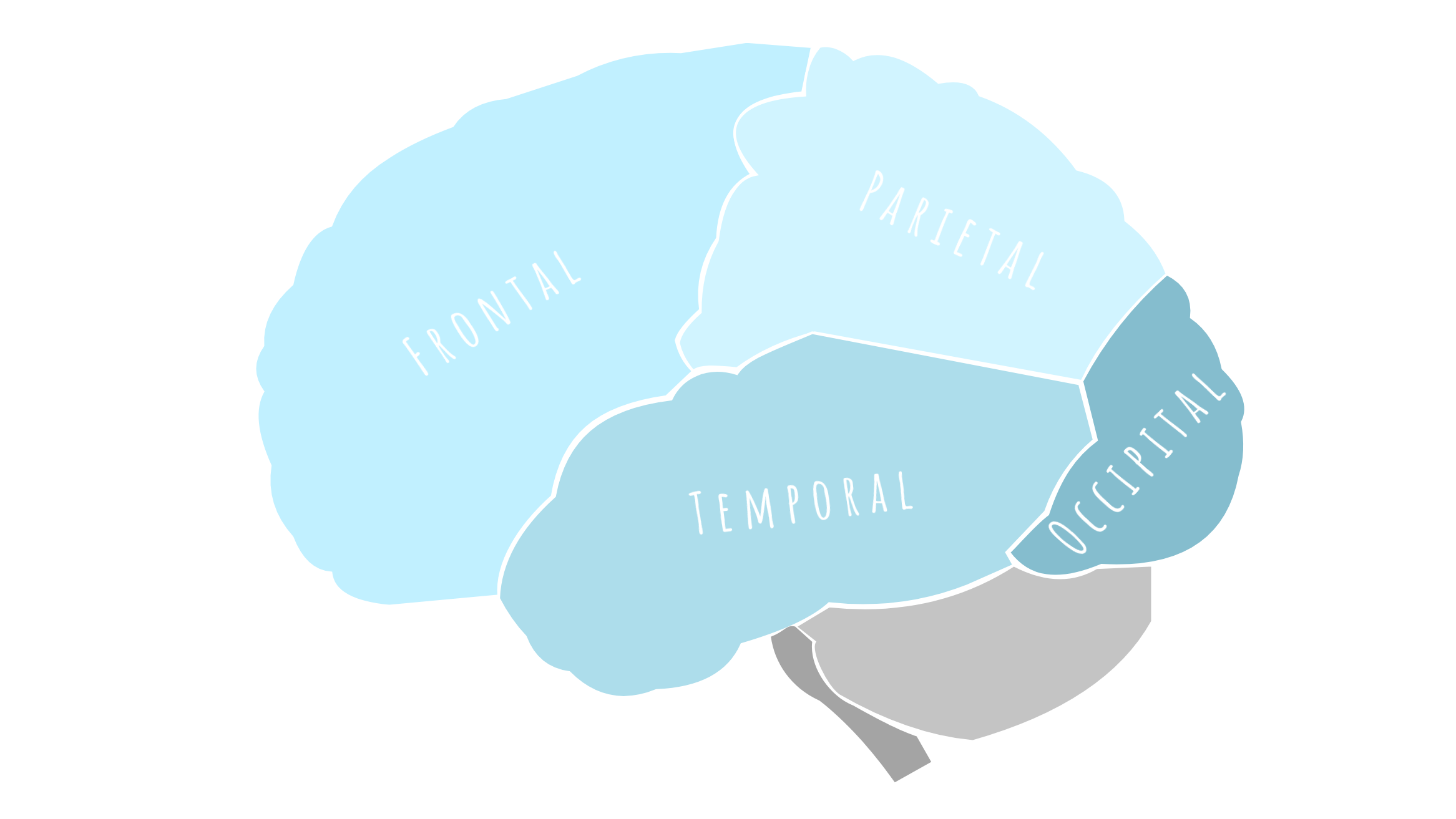 The frontal lobe – Who you are

The region responsible for abstract thinking, personality, emotional expression and problem solving. The frontal lobe has allowed us to be expressive, develop art, solve the most complicated equations and create memes. This brain region also contains the primary motor cortex; the area which maps out all the muscles of your entire body, with each small section being responsible for specific movements. The size of each muscle region is proportional to the complexity of the target muscle, meaning your ‘thigh’ region is much smaller than your ‘hand’ region.

This lobe is involved in organising incoming sound and understanding language. When the sound of your favourite song enters your brain through the ears, the ear lobe converts sound waves into signals which are interpreted and distributed by the temporal lobe. The ’emotional brain’ aka the limbic system also lives in the temporal lobe. This region is vital in the feeling of fear and the ‘flight or fight’ response. We also convert important information into long-term memories in the temporal lobe.

The smallest of the cerebral lobes, but with a major function – processing what you see. The nerves from your eyes project to the back of the brain, with the right eye sending information to the left occipital lobe and vice versa. This is where these specific signals are converted into visual information, such as colour, shape and depth – much like a programme which can convert computer code. 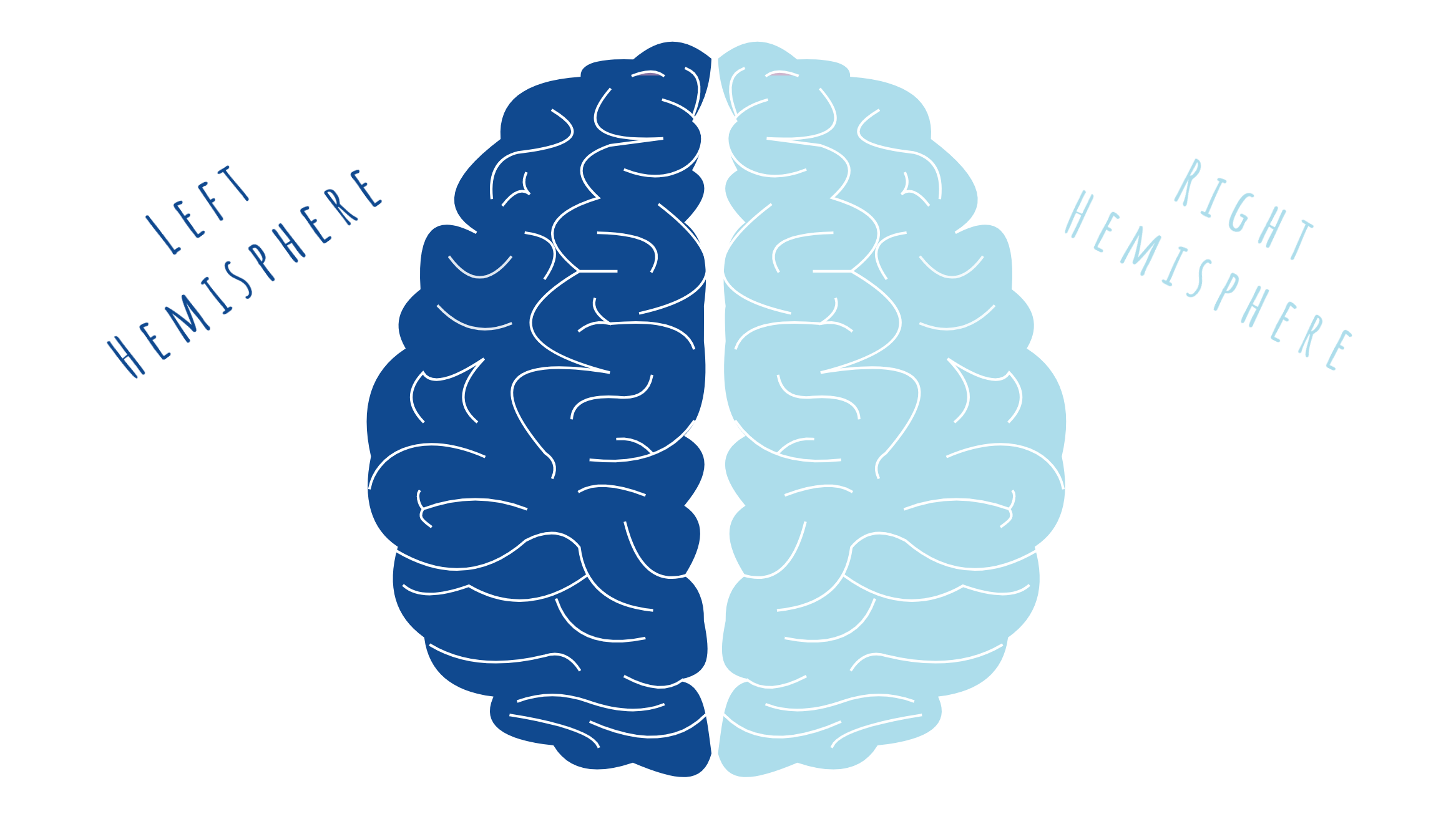 These brain structures were all so good, we made them twice. Well, not exactly twice, but you do have two halves to your brain called the left and right cerebral hemispheres. As per their names, the left hemisphere is found on the left side of your head and the right hemisphere on your right, and each have a frontal, parietal, temporal and occipital lobe. However, what isn’t such a given with these names is the side of the body each of the hemispheres control. In fact, the left hemisphere has almost complete control of the right side of your body and vice versa. This is caused by the nerves which send commands from your brain to your body ‘crossing over’ at the top of your spinal cord, and this is the case in all mammals. A neuroscientific phenomenon spoken about is whether you are left (analytical) or right (creative) ‘brained’. Watch out – one of my future posts will delve into this research and discuss how true this actually is!

There you have it – a map of your mind! You now know the major landmarks which give your brain structure and throughout my next posts, I will be sketching in the details of what these regions are made up of and how they perform their functions. Stay tuned!

Nice piece! Thanks for your time and effort on this article. Looking forward to more, cheers.

Great information. I do appreciate the simplicity. Keep up the good work.

Thank you very much for publishing this article, loking forward to more

A great article that presents the most complex organ in a simplified format to understand. Well done Julia. Can’t wait for the sequel.

This is so amazing! I love the way you explain this anatomy in clear language. It’s so cool that our frontal lobe has each body part with size in relation to use – that is a fun fact I will definitely bust out at parties. I can’t wait to read your upcoming articles. Thank you very much, Julia.

I just have to thank you, because it’s very difficult to find valuable information like your blog today, thank you very much.
https://blog.mindvalley.com/cerebral-hemisphere/